Santals, The one of the major ethnic group in Bangladesh. The Santals mainly live in districts of Rajshahi division. Their principal home is in radha (in West Bengal), the forests of adjacent Bihar (Jharkhand) and Orissa, and Chhota Nagpur. The British government assigned a special space to them and called it Santal Pargana. The census of 1881 shows that there were Santal settlements in the districts of pabna, jessore, khulna and even in chittagong. A survey of the Santal population of present Bangladesh area conducted in 1941 recorded their number as 829,025. The censuses organised after the Partition of Bengal (1947) did not count Santals as a separate group of people, and consequently, their exact number in East Pakistan could not be determined. According to an estimate made by Christian missionaries in the 1980s, the Santal population in northern Bangladesh was over one hundred thousand. According to the 1991 census, the Santal population was over two hundred thousand. 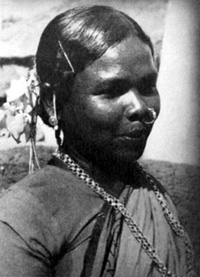 Santals are the descendants of Austric-speaking Proto-Australoid race. Their complexion is dark, height medium, hair black and curled, and lips heavy. mundas, oraons, paharias and some other ethnic groups have a good deal of similarity with the long-headed, broad-nosed Santals in physical features, language and culture. Similarity is also there in their village panchayet administration, in social values, and their characteristic love for dance, singing and music.

Santals are among the earliest settlers of the subcontinent and are acknowledged as the progenitors and upholders of agricultural system and agro-based culture. Although the chief god of Santals is the god of the sun (Sing Bonga, in their language), the god of mountain ' Marang Budu is also dignified enough to have become a village-god. Santals believe that soul is immortal and that supernatural soul (Bonga) determines worldly good and evil. Bonga occupies an important place in their daily worship. Probably that is why house-deity Abe-Bonga is quite a mighty god. Influence of folk Hindu deities is also visible in their religious ceremonies. In fact, Santal men and women are animistic nature-worshippers, but again they acknowledge Thakurjiu as Creator. Idol-worship is not a part of their religious practices.

Santals are fond of festivities. Like Bangalis, they also have many festive occasions around the year. Their year starts with the month of Falgun (roughly, 15 February-15 March). Almost each month or season has a festival or fiesta celebrated with the pomp of dances, songs and music. The Shialsei festival of Santals takes place in the New Year month of Falgun, Bongabongi occurs in Chaitra, Home in Baishakh, Dibi in Ashwin, and Sohrai at the end of Paush. Sohrai is a kind of national festival for Santals celebrated with great pomp on the last day of Paush (around 16 January). To express gratitude to the god of crops is also a part of this festival. It turns splendid with dance, songs, music and pleasant beauty of flowers along with food and drinks. Probably its greatest attraction is the chorus dance of Santal girls. Another important ceremony of Santals is called Baha or the festival of blossoms. The purpose of this festival at the beginning of spring is to welcome and offer greetings to the beautiful blossoming of colourful flowers. It is also characterised with an overflow of dancing, singing and music. 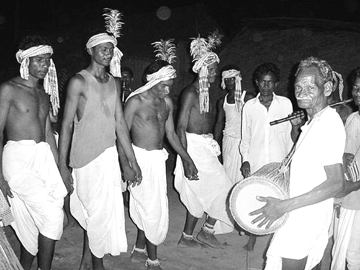 Santals live a poor life. They are compelled to sell their labour at a very low price in tea gardens or elsewhere. Besides, they dig soil, carry loads, or engage themselves in similar works of day labourers. They are accustomed to hard work. Like their simple, plain and candid way of life, their dress is also very simple. Women wear short, coarse but colourful sari, fix flowers on their heads and hair-buns, and make themselves graceful with simple ornaments. Men wear dhutis or gamchhas (indigenous towels). Well-to-do and educated Santals wear modern dress. Skilful workers as they are, Santal women, especially young girls are by nature very beauty-conscious. Santal men and women wear tattoos on their bodies.

Principal food items of Santals are rice, fish and vegetables. They eat crabs, pork, chicken, beef and the meet of squirrels. Jute spinach (nalita) is one of their favourite food items. Eggs of ducks, chicken, birds, and turtles are delicacy in their menu. Liquor distilled from putrefied rice called hadia (or pachai) is their favourite drink. They are also accustomed to distill liquor at home from mahua or palmyra syrup. These drinks are indispensable in their festive ceremonies. Santal women are skilled in making different kinds of cakes.

The Spring Festival of Santals provide young men and women an opportunity to exchange hearts. The hub of such exchange of hearts or choosing one's partner is the akhra (sort of club) just as the dhumkadia of Oraons. In the Santal society, there is no bar against young couples' premarital free-mixing. But in their married life, breach of faith is indeed rare. Divorce is allowed in their community. Paying the bride a dowry is still in vogue but the amount is usually very small. Both widows and divorced women have the right to remarry.

Domination of the male is more prominent in the Santal society although, the role of women in the family is by no means insignificant. Santal women rather take a leading role in earning livelihood or in farming work. The houses of Santals are small but their yards are very clean. Artwork on earthen walls of the house is an evidence of Santal women's liking for beauty and of their artistic mind. furniture in the house is very simple reflecting their plain lifestyle.

The Santal society is still ruled by traditional Panchayet system and the village headman enjoys special dignity in the society. The community's division into twelve gotras (clans) is still found among Santals. In common practice, marriage between a man and a woman of the same gotra is prohibited. But these regulations are not so effective today.

The Santal language (Santali) belongs to the family of Austric languages. Santali has profound similarity with Kole and Mundari languages. Today most Santals of Bangladesh speak both Bangla and Santali. Also many Bangla words are now adopted in Santali. There is no written Santali literature, but the rich heritage of folk songs and folk tales of Santals is acknowledged by all. Just like the fact that Santals have a language but no alphabet, they have a religion but no canonical scripture. In the terribly poverty-stricken life of Santals, Christian missionary work of social welfare and, along with that, preaching of the message of spiritual peace accelerated their conversion to christianity. On the other hand, as a result of financial aid from NGOs, desire for receiving modern education is growing among Santals, but poverty is a great obstacle. The Santal community has not been able to free themselves from the rule and exploitation of landowners and moneylenders. Santals took active part in the tebhaga movement that took place during the period between 1946 and 1950.

Santals cremate their dead bodies. But today, many of them bury the dead in graves. When an inhabitant of a village dies, the village headman's duty is to present himself at the place of the departed and arrange for the last rites with due respect. The custom of holding a sraddha (obsequies) ceremony later at a convenient time is also in practice in the Santal community. [Ahmed Rafique]