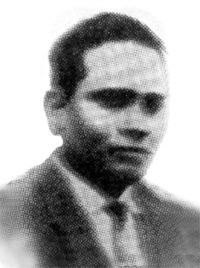 Sarkar, Nazmul Hoque (1937-1971) lawyer, politician, martyr intellectual. Nazmul Hoque was born in 1937 at village Harirampur in Bagha upazila of Rajshahi district. His father was Nabiruddin Sarkar. Nazmul Hoque had his early education at his village primary school. He passed Matriculation examination in 1952 from Kalidaskhali School and I.Com examination in 1955 from Rajshahi College. Later he obtained B.L degree and joined the Rajshahi district bar. In 1966 he joined the Dhaka High Court bar. He was the general secretary of Rajshahi district bar council for two consecutive terms. Nazmul Hoque was active in politics along with his legal profession. He was the vice president of Rajshahi district unit of Awami League and was later elected as president of the unit. He had active role in the education movement of 1962 and in mass movement of 1969. He was elected a member of the Pakistan National Assembly in 1970 from Rajshahi-8 constituency as a nominee of Awami League. During the non-cooperation movement in March 1971 he organised the movement in Rajshahi. After the army crackdown on 25 March 1971 and the beginning of genocide by the Pakistan army he attempted to create a resistance in Rajshahi. But soon he fell a victim in the hands of the Pakistan army. After the dreadful might of 25 March he was lifted from his hideout and could not be traced since then.

After the liberation of Bangladesh, the government established a high school at Kadirganj in Rajshahi district in 1972 which was named as Shaheed Nazmul Hoque High School. The Postal Department of the Government of Bangladesh issued commemorative postal stamp in the name of Nazmul Hoque Sarkar on the Martyred Intellectual Day on 14 December 1998. [Abu Md. Delwar Hossain]