Sea Snake any of the front-fanged, venomous, marine snakes, related to the cobras and kraits belonging to the family Hydrophidae. All sea snakes under sub-family Hydrophiinae have un-differentiated body scales. They are purely aquatic producing live babies. They cannot move on land. The species of sub-family Laticaudinae have a row of large belly scales or the ventrals that are used for their progression on land as they are not baby-producing but egg-laying snakes. So they come on shore only for laying eggs and the rest of the time is spent in the sea. They are also called amphibious sea snake because they lay their eggs on land in spite of their aquatic habit. Being more closely related to the land-dwelling kraits, they are often known as sea kraits. 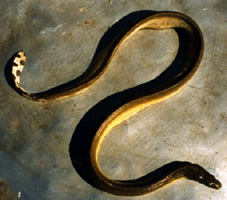 Sea snakes have, by and large, laterally compressed body and flattened, vertically compressed oar-like tail; nostrils are on top of the snout and provided with valves that prevent water from entering into the trachea when they swim under water. They have special glands to secrete salt out of their bodies. Sea snakes swim by undulating movement of the body that starts from the head and ends in the tail that works as radar. They have elongated and large lungs running almost through the whole length of the body. The posterior portion of the lung works as an air reservoir helping the snakes to remain afloat and supplying oxygen in case of prolonged dive. A sea snake can remain submerged for a few hours. Often they bask on the water surface during the breeding season. Most of them feed on fishes, especially long-bodied eels and pipe fishes while some may eat prawns and still others are known to eat fish eggs. Most sea snakes live close to the shore, in the mangroves, and in the estuaries.

Sea snakes produce the most toxic venom which is neurotoxic. However, their biting mechanism does not seem to be well-equipped to attack human beings. The fishermen in Dubla Char, Kachikhali, Maheshkhali, Kutubdia, Sonadia, and Jinjira Island bring in hundreds of sea snakes along with their fish catch. They handle them so casually that nobody would think that they are handling poisonous snakes. There is no official record of death of human being from the bite of a sea snake in Bangladesh. There is a great demand for sea snakes in Japan where these are known to be smoked and eaten. [Ali Reza Khan]