Sen, Probodhchandra (1897-1986) expert on poetical metre, historian and Tagore specialist. Born on 27 April 1897. Originally he lived in village Chunta at Sarail of Brahmanbaria district. His father was Haradas Sen and mother was Swarnamoyee Sen. 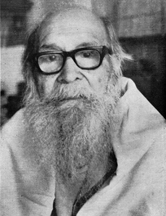 Probodhchandra took his primary education from Giridhari Pathsala, Yusuf High English School and Comilla Zila School. He did his matriculation from Comilla Zila School in 1915, Intermediate of Arts from Comilla Victoria College in 1920, BA with Honours in history in 1924 and MA in ancient Indian history and culture in 1927. As a student he became a member of the revolutionary Anusilan Samity. On suspicion of being a seditionist, he was arrested on 12 September 1916 and confined in jail. After the end of the First World War he, along with other young detainees, was released from jail in 1918. About this time the ‘National School’ was established in Comilla and he worked here as a student volunteer for four years without remuneration. His career however began in 1932 at Khulna’s Daulatpur College (then known as Daulatpur Hindu Academy) as lecturer of history and Bengali literature. He continued to serve in that capacity until 1942 when he joined Viswabharati’s Vidyabhavan as Rabindra Professor at the invitation of Rathindranath Tagore.

When in 1951 Viswabharati was turned into a central university, Probodhchandra Sen was made head of the Department of Bengali (1952-1962). During Tagore's birth centenary he was made the first Rabindra Professor and Principal of the reorganized Rabindra Bhavan (1962-65). When he retired in 1965 he was made Professor Emeritus of Viswabharati.

Although known in Bengali literature as an expert in prosody, he was essentially a student of ancient Indian history and culture. After doing his MA he began research into the history of old Bengali, first under the supervision of Ramkrishna Gopal Bhandarkar and later under Hemchandra Roychoudhury. At the root of his interest in the history of ancient Bengali was the patriotic movement of bankimchandra chattopadhyay, Rabindranath Tagore and Aksheykumar Moitreyo and the swadesi movement against Bongobhongo or partition of Bengal. In this respect his particular interest was in the geographic history of Bengal. His book Banglar Itihash Sadhana (1992) is regarded as of particular significance in the historiography. His three other books ' Banglay Hindu Rajotter Shesh Yug (1930), Dharmavijoyi Ashok (1947) and Dhammopadparichay (1953) were his significant contributions in this respect. He had deep interest in Emperor Ashok and Buddhism. In his early life he seemed inclined towards Vedic religion but later he became a believer in Buddhism. His two books on ancient Indian literature and culture ' Ramayana O Bharat Sanskriti (1962) and Bharatatma Kavi Kalidas (1973) ' qualify to be regarded as highly valuable contributions to Bengali literature.

It was because of his historical research that the misunderstanding centering round the Indian national anthem Janaganamana was removed. In this context his books Bharatborsher Jatiya Sangeet (1949) and Indian National Anthem (1949) may be mentioned.

Probodhchandra Sen had in his psyche rationalism, humanism and awareness of Bengali culture of the nineteenth century. Through ceaseless thinking he tried to enrich this psyche. Just before his death he made a will in which he revealed his beliefs. In it he said he had no confidence in the traditional beliefs in God, heaven, hell, and life after death. He also opposed the traditional social customs in respect of a dead person. He enjoined that after his death there should be no shraddha, prayers and memorial services and that no one should observe his birthdays or death anniversaries. But he directed in his will that while carrying his body to the funeral pyre the cortege should sing not religious hymns but patriotic songs like 'O amar desher mati tomar pore thekai matha' and that they should dab their forehead with the soil of the land instead of sandalwood paste.