Sena Kalyan Sangstha a government recognised autonomous organisation, originated at the end of the World War II as Post War Services Reconstruction Fund (PSWR), renamed in 1953 as Fauji Foundation, and in 1972 as Sena Kalyan Sangstha (Armed Forces Welfare Organisation). The organisation was constituted as a charitable trust incorporated under the Charitable Endowments Act 1890 devoted exclusively to the welfare of ex-servicemen of the armed forces and their dependants. In 1947, the government of East Pakistan received Tk 5.22 million as its share for the PSWR Fund and the money was in industrial and commercial fields. The organisation purchased a plot of land in dhaka and erected a three-storied building on it in 1950. The building was later demolished and a modern 21 storied building, now known as the Sena Kalyan Bhaban was constructed in the early 1980s. The industries set up by the organisation in the period from 1960 to 1970 included the Fauji Rice Mills at rangpur, Fauji Chatkal at Ghorasal and Fauji Flour Mills at chittagong. The organistion purchased substantial shares of the East Pakistan Lamps, Electrical Industries and Pakistan Tobacco Company. 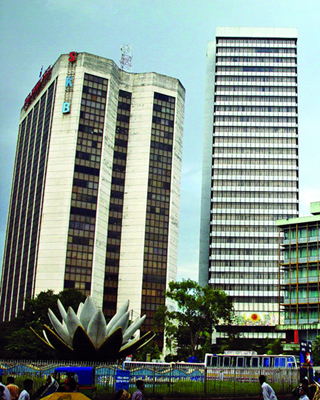 In its present form, Sena Kalyan Sangstha started its operations in 1972 with a net worth of Tk 25 million and by 1996, it became the largest welfare-cum-industrial organisation in Bangladesh with a net worth of Tk 987 million. It is administered by an 8-member board of trustees appointed by the government and the chief of the army staff is its ex-officio chairman. Other members of the board are the adjutant general, Bangladesh Army (vice-chairman), nominees (one each) of the chief of naval staff, chief of air staff, secretary of the Ministry of Defense and secretary of the Ministry of Finance, the director of the Bangladesh Armed Services Board, and the managing director (member secretary). The executive body for day to day operations of the organisation is the management committee, which comprises the vice chairman of the board as the chairman and the managing director, a deputy managing director, and 6 directors (for welfare, administration, finance, marketing, production and planning, and research and development).

The organisation operates in the private sector and although it receives more than Tk 30 million as grant from the government every year, all expenditures on its diverse welfare, industrial and commercial projects are met out of its own generated income. The organisation generates funds for the welfare of its beneficiaries and their dependants. The beneficiaries of the organisation include (a) released, retired, discharged personnel of the regular armed forces and the cadets invalidated out of service on account of disability caused in work in the military services, (b) wives and widows of the males of the above categories, (c) sons (aged up to 19 years) and unmarried and divorced daughters of the ex-servicemen, and (d) invalid sons of ex-servicemen irrespective of age, for medical treatment.

The gross turnover of Sena Kalyan Sangstha reached Tk 2 billion in 1995, when its assets and liabilities were about Tk 2.6 billion and Tk 1.6 billion respectively. By 2000, the organisation gained in economic strength by addition of Mongla Cement Factory with production capacity of 400,000 tons of cement per year. That year the organisation owned 15 industrial and two commercial units. In addition, it had 5 sales outlets, 15 real estates and 3 industrial enterprises. The annual amount of money spent by the organisation in welfare of its beneficiaries exceeded Tk 40 million in 1996 and more than 80% of the surplus funds goes as educational stipend. The other two major heads of welfare expenditure are stipends for training and grants for medical treatment. The total expenditure in stipends/awards of the organisation during 1972-1996 was Tk 105 million to 250,038 recipients. Sena Kalyan Sangstha maintains two rest house at Dhaka and another at Chittagong for the ex-servicemen, who get accommodation in them, if required, at nominal charges. The organisation maintains its quality of management by a team of trained and hard working personnel.