Sena Sculpture A large number of sculptures representing Hindu gods and goddesses belong to the phase of artistic activity initiated under the Sena rulers (c 1097-1223 AD). From the artistic point of view, Sena sculpture is a continuation of the Pala style in vogue till the late 11th century AD. The slender body form of the late Pala period sculpture is retained in the Sena period, but the modeling quality shows a marked deterioration.

Two dated images - one of Sadasiva from Rajibpur, Dinajpur inscribed in the reign of Gopala III (c 1129-43 AD) and the other of Chandi from Dalbazar, Dhaka, inscribed in the third year of Laksmanasena, provide the stylistic index for Sena sculptures. The stone sculpture of this period is seen overwhelmed by the exuberance of decorative motifs. The modeling of the body is still retained but in a decadent manner. This is more evident in the bronze image of Visnu from Rangpur, now in the Indian Museum, Calcutta. The famous silver image of Visnu from Churain, Dhaka (Fig-1), which is regarded as one of the best examples of the metal caster’s art, is no exception. The body form of these sculptures is more elongated than those of the 11th century.

The legs are almost column-like and stiff with an incised circular ring to indicate the knee. Despite of the attempt to show the main figure in the round by cutting the back-slab and by following the curvature of the figure and the accompanying figures in high relief, the entire composition seems compressed into the stela. Even the figures with suggestions of movement look dull and stereotyped. The forced smile drawn in some images such as the one in the stone image of the Durga at Shakta (Fig-2), seems unusual and contrary to the nature of the action in which the goddess is engaged. 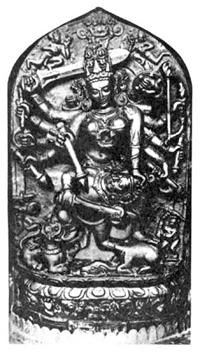 However, a few freestanding images of the Sena period exhibit bold and better modeling. In this connection mention may be made of a stone torso of Garuda from Malda (Fig-3) and a colossal stone head of Visnu (Fig-4) from Padumshahar Tank, both now in the Varendra Research Museum, Rajshahi. There is evidence of better modeling in a few composite figures too.

The stone image of Ardhanarishvara (Fig-5) in the Rajshahi Museum is the best example of such a sculpture. Carved completely in the round, the left half of the image bears all the features peculiar to Uma while the right half displays the traits of Shiva. Another composite sculpture of the period - the stone image of Apitakucha (Fig-6) from Vikrampur, now in the National Museum, Dhaka is noteworthy for its superb execution. Not only the minute carving but also the full face of the goddess with half closed eyes, beautifully carved eyebrows, and lips have invested the image with a serene and sublime grace which is hardly matched in any other sculpture of the period. 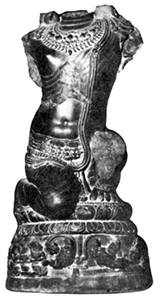 However, another type of composite sculpture known as Uma-Maheshvara alingana-murti (Fig-7), does not have the qualities of the Apitakucha. These images seem to be popular in the Sena period. Almost all the museums in Bangladesh have a number of specimens of this icon. In this type of images Siva is shown seated on a lotus throne in lalitasana, with Uma seated on his left thigh, and in close embrace. The back slab of the images are seen crowded with subsidiary deities, profuse vegetal and architectural decorations. In this respect, the image of Laksmi-Narayana, a Vaisnavite parallel of the Saivite Uma-Maheshvara and a rare image, now in the National Museum, Dhaka, exhibits a better sense of composition and chaste execution. In spite of technical perfection, all the images of this type, whether Shaiva, Vaisnava or Jaina, instead of divine repose exhibits a sensuous beauty.

In fact, the 11th century tendency to accommodate many subsidiary figures, increase linear movement of drapery, display frivolous exuberance of vegetal and other decorative motifs, and make clear divisions of the back-slab into a number of architectural divisions, which became more pronounced in the' 12th century. 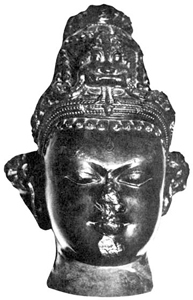 In many images where vegetal and other conventional decorations are absent, the back slabs can be seen covered with a large number of additional miniature figures as in the image of Kalyan-Sundara from Sankarbandha, now in the national museum, Dhaka. This sculpture speaks of the Bengali sculptors' ability and skill to work on stone. But the overall affect of the stela is that of clumsiness. Moreover, a certain stiffening of the physiognomic features marks the main figure of the sculptures.

In many sculptures of the Sena period not so over-crowded with subsidiary figures or decorative devices, the same stiffening of the facial and physiognomic features can be observed. The image that has been tentatively identified as Kaumari, now in the Mahasthangarh Museum, is an example of such a sculpture. It is the only image of its kind in Bangladesh. The facial quality of the nicely carved sculpture is noteworthy. There is a smile on the face but it does not bear much spiritual significance. This trait is also noticeable in almost all the later products.

Some of these sculptures may be regarded as excellent examples of the art of the Sena period for their superb execution, technical perfection and physical charm. In this respect, particular mention may be made of the black stone image of the four-handed Manasa of Rangpur Museum. Decked in fine garments and jewelled ornaments, wearing a sumptuous chignon and with full and prominent bosoms, she strikes us as a gorgeous lady, dazzling us, and there by justifying her other name of Jagatgauri. Though the main figure in this image is a bit petrified from the modeling point of view and the back slab is full of conventional decorations, this is a unique sculpture that reflects the style preferred during the Sena period.

Worldly exuberance and sensuousness are also characteristics of the images of Ganga. A number of images of this deity have been discovered in Bangladesh but, the one in the Rajshahi Museum, dated to the Sena period far surpasses all others, both for the sensuousness of its representation and the excellence of its execution.

The image is done completely in the round and exhibits masterly modeling. She wears frivolous and lavish jewellery and apparel but, unlike other images, they have not over-shadowed the plastic significance of the bodily form. The sensitive softness of the flesh is intriguingly suggested in the well-marked and deeply incised navel. Although not a new technique for Indian sculptors, except for the Sanchi torso, nowhere has it been so successfully used. The constricting belt that holds the sweet smiling face and youthful body seems more enhanced by the smooth and shining finish of the surface.

The image of Ganga and the other images dressed in luxurious garments and jewellery reflect the life of luxury prevalent in the Sena Court and amongst the aristocrats of the period. The voluptuousness of the Sena sculpture is indeed a manifestation of the type of culture patronized by the royal court and the upper class of the society. Sensuality and grace were also properties of the sculptures of the preceding centuries, but it was the Senas who allowed them to degenerate into a more worldly lavishness.

Except for a few noble examples, the sculptures of the Sena period may be regarded as products of a degenerate system, which very clearly demonstrates that the art tradition was almost exhausted from within and was heading for stagnation by the end of the 12th century. [Shamsul Alam]