Sengupta, Jatindranath (1887-1954) one of famous poet of modern Bangla literature, was born at Shantipur in the district of Nadia of west bengal. After receiving the BE degree (1911) from Shibpur Engineering College, he joined Nadia District Board and then Kasimbazar Raj-Estate as an overseer. He entered into the literary world by writing poems and soon came to be recognised as a major poet. Although he wrote verse in the age of Rabindranath, he was able to break face of his influence and earn fame for his distinctive style. 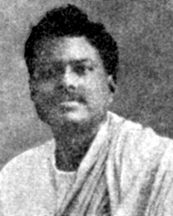 Jatindranath was a creative writer who made society and contemporary life as theme in his poems. He treated these subjects satirically. All his poetical works reflect a deep pessimism that life is full of sorrow and happiness ephemeral-seem to be his viewpoint. But the conclusion that life was full of sorrow was not for him the result of an outburst of emotion; on the contrary, he judged life in the light of his experience and observation. He published the following collections of poems: Marichika (Mirage, 1923), Marushikha (Flame of the desert, 1927), Marumaya (Illusion of the desert, 1930), Sayam (Evening, 1940), Triyama (Night, 1948), Nishantika (End of the night, 1957).

He also published a collection of his poems called Anupurba (Succession, 1946). The first three books of poems by him deal with the anguish induced by deserts, tire and devastation, and the last three books dwell on the significance and symbolism of the darkness of the night.

According to Jatindranath, the first part of a man's life passes through the kind of strife and struggle experienced by people living in a desert while the last part is characterised by decrepitude, ennui and uncertainty, symbol lised by the darkness of night. Neither love, nature or God can dispel the sorrow, disappointment and ennui of life. He believed that God himself represented sorrow and did not have a message of hope for the world; Thus there is nothing called love; and that only consciousness can sustain us.

The language of Jatindranath is logical and dispassionate. He was able to go to his core idea directly. But in his later works he showed some romantic confusion and an unsettled mind. He believed in the philosophy of life and politics of Mahatma Gandhi. Jatindranath translated Macbeth, Othelo, Hamlet, Kumarsambhava etc in the later years of his life. He also published a book of criticism called Kavya-Parimiti (The limit of poetry, 1931). He published a memoir called Smrtikatha (memoirs) in the monthly Basumati (1949) using the pseudonym 'Bipratip Gupta'. [Wakil Ahmed]