Sengupta, Jatra Mohan (1850-1919) lawyer, politician. He was born on 30 July 1850 at village Barma under Chandanaish upazila of Chittagong district. His father was Trahiram Sen and mother Menaka Devi. Trahiram Sen was an Ayurvedic physician. Jatra Mohon passed Entrance examination from Chittagong Government School in 1868, FA (First Art) in 1870 from Chittagong College, and passed BA examination from Kolkata Cathedral Mission College. Jatra Mohon thereafter took a job in the commissioner office of Chittagong. But soon he left and went of Calcutta to study law. Due to financial hardship, he along with his study joined as the Headmaster of Compound Kedison Mission School in the convent of Mr. Long in Kolkata. He obtained B.L degree in 1876 and joined the Chittagong district bar. Jatra Mohon Sengupta earned great reputation as a lawyer in undivided Bengal. 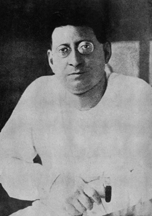 Jatra Mohon was interested in Bangla literature. It was by his initiative that the Bangiya Pradeshik Sahitya Sammelan was held in Chittagong presided over by akshay kumar sarkar. Jatra Mohon had immense contribution to development of education. He established a girls' school at Jamal Khan Road in Chittagong after the name of his father-in-law, Dr. Annada Charan Khastagir. For the elevation of this institution to a high English school he donated sufficient land and a house. He established a girls' school at village Barma which was named after his wife, Binodini. He established the Trahi Menaka School in 1883 after the name of his parents. Besides, he established a charitable hospital at Barma, Town Hall (Jatra Mohan Sen Hall) and Oldham Club in Chittagong. In 1895, he established the Brahma Mandir on his own land and at his own expense. He died in Kolkata on 2 November 1919. [Ahmad Momtaz]