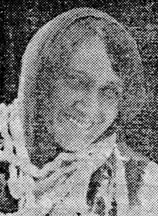 Sengupta, Neli (1886-1973) politician, social worker. She was born on 12 January 1886 at Cambridge in England. Her father was Frederick Grey. Neli Grey passed Senior Cambridge in 1904. Neli came in contact with jatindra mohan sengupta of Chittagong who was in London for study of Law. They were married on 1 August 1909. Jatindra Mohan Sengupta was the son of jatra mohan sengupta, a distinguished lawyer and politician of Chittagong. After marriage Neli Grey (Neli Sengupta) came to Kolkata with her husband. Neli Sengupta became a source of inspiration to Jatindra Mohan in his social, political and cultural life. The advice and inspiration of the learned wife helped Jatindra Mohan in emerging into a successful lawyer, undisputed leader of undivided Bengal Congress and of All India National Congress.

In 1910, Jatindra Mohan and Neli Sengupta joined Congress politics in Kolkata. In 1921, Neli Sengupta was arrested for the first time while selling khaddar in Chittagong in response to the non-cooperation movement of Mahatma Gandhi. In 1930 she visited Delhi, Amritsar and other places with Jatindra Mohan during the second non-cooperation movement. Neli was arrested while delivering a speech in a meeting at Delhi. On 23 July 1933, the Congress leader Jatindra Mohan died in the prison. Even after the death of her husband Neli went on fighting for the cause of liberation. In 1933 she was elected chairperson of All India National Congress. Herebefore two women were the chairperson of National Congress, Anne Besant in 1917 and sarojini naidu in 1925. During this time the activists of the banned Congress were being arrested indiscriminately. Neli was arrested no sooner could she complete the oath taking as chairperson. In the same year she was elected Alderman (next to the Mayor in status) of Kolkata Corporation.

Neli Sengupta was elected a member of Bengal Legislative Assembly in 1940 and 1946. She opposed the division of India. After the partition of India in 1947 Neli came to Chittagong at the instance of Mahatma Gandhi. She was active in politics in Chittagong also. She was elected a member of the East Bengal Legislative Assembly in 1954. Neli had to suffer house arrest for several times due to the political instability prevailing at that time in Pakistan. In 1970 Neli became ill and went to Kolkata for treatment. Neli died in Kolkata on 23 October 1973.

In recognition of her life long service to the cause of the nation, the Government of India conferred upon her the state insignia of Padma-Bibhushan in 1973. [Ahmad Mamtaz]