Administration Serajdikhan Thana was formed in 1914 and it was turned into an upazila in 1983. 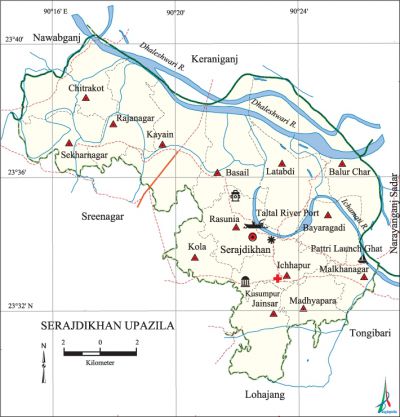 Historical events The anti-British movement was very strong in this upazila. The Congress activists used to make bombs at village Ichhapur and Madhyapara villages and distributed these to the activists of the adjacent areas. While making bombs at village Madhyapara there occurred the incidental explosion of a bomb. At the intelligence of the explosion a military camp of the British Gorkha soldiers was set up at the junction of three roads on the western side of Ichhapura Bazar in order to suppress terrorist activities. In 1971 Abdul Aziz of village Shialdi was shot dead for uttering the slogan 'Jai Bangla' at the sight of the Pak army. Abdul Aziz was the first martyr of the upazila in the war of liberation. On 27 March 1971, the freedom fighters took control over the police station and captured all arms and ammunitions. On 19 May, the Pak army again took control of the thana. On 20 May, the Pak army killed a number of teachers of the upazila. On November 19, an encounter was held between the freedom fighters and the Pak army at the thana compound in which one Pak soldier and one razakar were killed.'

Natural disasters The tornado of March 1968 hit a number of villages from Kanthaltali to Malapdia and caused heavy damages to properties of the affected villages.