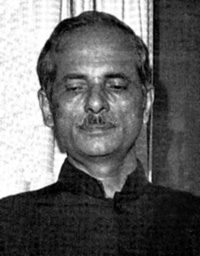 Serniabat, Abdur Rab (1921-1975) lawyer and politician. Abdur Rab Serniabat was born on 27 Chaitra 1327 (1921 AD) at village Sarail in Gouranadi upazila of Barisal district. He passed Matriculation examination from Bhola High School, BA from Barisal B M College, and obtained his law degree from Dhaka University. He started his political career as the general secretary of Ganatantri Party (1956-57). He was elected a member of the central committee of National Awami Party (NAP) formed in 1957.

As a member of the cabinet of Bangabandhu Sheikh Mujibur Rahman (1972) he was in charge of the Ministries of Land Administration, Land Reforms and Flood Control, Water Resources and Power. Abdur Rab Serniabat was elected a member of the Jatiya Sangsad from Barisal in 1973. He was a member of the central committee of Bangladesh Krishak Sramik Awami League. He led peasants' movement with the object of bringing about the emancipation of the peasantry. He was brutally assassinated in Dhaka by a group of army personnels on 15 August 1975. [Md Azom Baig]