Seven Soil Tracts very simple and generalised system of classification of Bangladesh soils, even non soil scientists easily understand it. Though not natural, this was the first technical classification of the soils of Bangladesh. In 1956 M Amirul Islam and Wahedul Islam made a good attempt at classifying the soils of Bangladesh at the time when information available on the soils themselves was really scanty. Physiographic condition and the geological origin of the parent material got the importance in this classification. In case of coast soils, however, the chemical characteristics were also taken into consideration. The main objective of the classification was to make an appraisal of nutrient status of the soils of Bangladesh. A brief description of the seven tracts follows: (1) Madhupur Tract or Red Soil Tract, (2) Barind Tract, (3) Tista Silt, (4) Brahmaputra Alluvium, (5) Gangetic Alluvium, (6) Coastal Saline Tract, and (7) Hill Tracts.

Madhupur Tract or Red Soil Tract Comprises the former greater districts of Dhaka and Mymensingh and some isolated areas in Chittagong, Comilla and Sylhet districts. The area covered under this tract is around 10,000 sq km. This tract represents the red lateritic soils of Madhupur area, a highland tract above flood level intersected by numerous large and small depressions, locally known as 'baid'. The soils of this tract have clayey texture and contain large quantity of iron and aluminium, which are highly aggregated. The pH value ranges from 5.5 to 6.0 in the topsoil. The cation exchange capacity is low and the soils have the high phosphate fixing capacity. The soils are deficient in organic matter, nitrogen, phosphorus and lime.

Barind Tract Occupies a total area of around 13,000 sq km of the former greater districts of Rajshahi, Dinajpur and Bogra. This tract belongs to an old alluvial formation which is usually composed of massive agrillaceous beds of pale reddish brown colour that often turns yellowish on weathering. Lime nodules and pisolitic ferruginous concretions occur throughout the soil. Locally the soils are rich in lime. Soil pH varies between 6.0 and 7.5. Soils are deficient in nitrogen and phosphorus. 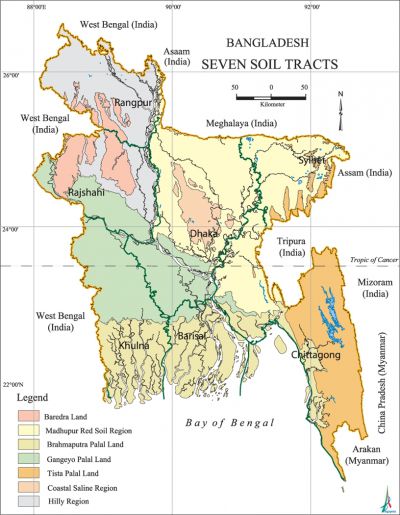 Tista Silt Comprises parts of the former greater districts of Rangpur, Dinajpur, Bogra and Pabna. It covers an area of approximately 16,000 sq km. The predominant soil texture is sandy loam. The pH of the topsoils ranges from 5.5 to 6.5. The soils are in general fertile and are rich in potassium and phosphorus.

Brahmaputra Alluvium Located in the former greater districts of Comilla, Noakhali and Sylhet except the hilly areas and parts of the former districts of Mymensingh, Dhaka and Chittagong. It covers an area of 40,000 sq km. The dominant soil texture is sandy loam. The soils are acidic in character and the pH ranges from 5.5 to 6.8. The soils are naturally fertile and are recharged every year by fresh deposition by the floodwaters.

Gangetic Alluvium Comprises the former greater districts of Jessore and Kushtia and some parts of Rajshahi, Pabna, Faridpur, Khulna, Barisal and Dhaka. This tract occupies an area of 27,000 sq km. It represents the riverine lands of the Gangetic plains. Soil texture varies from clay loam to sandy loam. The pH of the soils ranges from 7.0 to 8.5. The soils are moderately fertile and are characterised by calcium carbonate content and are well supplied with phosphate and potassium.

Coastal Saline Tract Comprises parts of the former Barisal, Patuakhali, Khulna, Noakhali and Chittagong districts. A total of around 20,000 sq km area is under this tract. It represents the flat low-lying areas along the coastal belt and the estuarine islands. The soils are saline and the pH values are neutral to slightly alkaline. The soils are well supplied with potassium and phosphorus. The sundarbans is located in this tract.

Hill Tracts Comprise Chittagong Hill Tracts and the Garo Hills of the former greater Mymensingh district. Hill Tracts cover an area of around 15,000 sq km. The soils consist of hard red clay with a mixture of fine sand of the same colour and nodules containing a large percentage of sesquioxides. The soils are moderately to strongly acidic. The soils are highly leached and have a low natural fertility. Hills are mainly under natural and plantation forests. Shifting cultivation is practiced in some places.