Shah Jalal's name is associated with the Muslim conquest of Sylhet. Tradition goes that a Hindu king named Gaur Govinda ruled the Sylhet area. Burhanuddin, a Muslim who lived in the territory under his control once sacrificed a cow to celebrate the birth of his son. But a kite snatched a piece of flesh of the slaughtered cow and it fell from its beak on the house of a Brahmin. According to another tradition, the piece of flesh fell on the temple of the king himself, which he took as a great offence. At the order of the king, Burhanuddin's hands were said to have been cut off and his son killed. Burhanuddin went to gaur and submitted a prayer to Sultan shamsuddin firuz shah for justice from him. The sultan accordingly sent an army under the command of his nephew Sikandar Khan Ghazi, who was however, defeated twice by Gaur Govinda. The sultan then ordered his sipahxalar (armed forces chief) Nasiruddin to lead the war. During the same time Shah Jalal (R) with his 360 followers reached Bengal and joined the Muslim army in the Sylhet campaign. This time the Muslim army won, Gaur Govinda fled the country and Sylhet came under Muslim rule. 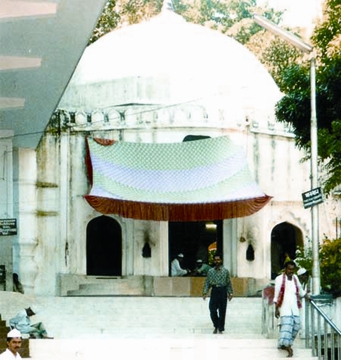 Though based on folk tales, historic evidences support the truth of the war event. King Gaur Govinda, Sultan Shamsuddin Firuz Shah, Skiandar Khan Ghazi, Nasiruddin, Shah Jalal are all historical persons; there might be some imaginary accounts in illustrating the story, but the main event, ie, the conquest of Sylhet, is a historical fact. Sultan Shamsuddin Firuz Shah ruled Bengal during the period from 1301 to 1322 AD and expanded the territory under his rule in all directions. Epigraphic and literary sources also attest the fact of the conquest of Sylhet during Shamsuddin Firuz Shah's rule and of the involvement of Shah Jalal (R) in the process.

ibn batuta visited Bengal when Sultan fakhruddin mubarak shah was ruling at Sonargaon (1338-1349 AD). He met Shah Jalal (R) in the latter's khanqah and stayed three days there in 1346 AD. Ibn Batuta, however, wrongly recorded the name of the saint as Shaikh Jalaluddin Tabrizi (R). Scholars have established that Ibn Batuta's 'Tabrizi' is a mistake for 'Kuniyayi', the epithet for Shah Jalal (R).

The earliest and most acceptable source of information about the first Muslim conquest of Sylhet and the advent of Islam in the area is a Persian inscription of 918 AH/1512 AD issued in the reign of Sultan Alauddin husain shah (1494-1519 AD). According to the inscription, Sylhet was first conquered by Sikandar Shah Ghazi in 703 AH/1303 AD in the reign of Shamsuddin Firuz Shah. The inscription was dedicated to the sacred memory of Shaikh Jalal Mujarrad ibn Muhammad. Though the inscription was issued after a little more than two hundred years of the event, it seems to have the accurate historical dates.

An account of the conquest of Sylhet by Shah Jalal (R) and his companions is found in the Gulzar-i-Abrar of Ghausi, written in 1613 AD. It is based on the earlier work Sharh-i-Nuzhat-ul-Arwah by Shaikh Ali Sher, a descendant of Shaikh Nurul Huda Abul Karamat, who was a companion of Shah Jalal (R) who took part in the conquest of Sylhet. According to this source, Shaikh Jalaluddin Mujarrad, a khalifah of Sultan Syed Ahmed Yesvi, was born in Turkistan and had settled in Sylhet. With the permission of the Pir, he came to India with 700 companions to take part in jihad (holy war). He reached Bengal with 360 of his companions. They fought against Raja Gaur Govinda of Sylhet who fled and the country around Sylhet fell into the hands of the victors. Shah Jalal (R) divided the conquered lands among his followers, permitted them to get married, but he himself, however, remained a celibate. This source gives the credit for conquering Sylhet to Shah Jalal (R) and his followers, and has no reference to any reigning king or his generals.

Nasiruddin Haidar wrote a biography of Shah Jalal (R) in Persian in 1860. The author claims that in writing the book titled Suhail-i-Yaman, he used two Persian manuscripts such as Risalat written by Muhiuddim Khadim in 1711 AD and Rauzat-us-Salatin written by an unknown author in 1721 AD. Both the manuscripts were kept preserved in the dargah of the saint. Shah Jalal's father, Muhammad, was a sufi of Yamen. Shah Jalal (R) lost his parents in his childhood and was brought up by his maternal uncle Sayyid Ahamd Kabir Suhrawardy, a great saint. After completion of formal education, Shah Jalal (R) received spiritual lessons from his uncle. It is said that Kabir gave him a handful of earth and instructed him to go to India for preaching Islam. Shah Jalal (R) was told to find the sacred place of India where the earth was of the colour and smell similar to the earth given to him and should pass the rest of his life there in prayer and meditation. On his way to India, Shah Jalal (R) met Shakh Nizamuddin Auliya at Delhi who gave him a pair of pigeons of a special species, which, according to folk belief is found still today in the dargah of Shah Jalal (R) in Sylhet and some other places of Bengal. So advised, Shah Jalal (R) moved to Bengal. It so happened that during this time, the army of Sultan Shamsuddin Firuz Shah was fighting against King Gaur Govinda of Sylhet. Shah Jalal (R) and his followers joined the battle. The biography of Shah Jalal (R) gives description of how Sylhet was conquered, as well as of some miraculous events that demonstrate the spiritual powers of the saint, which were considered for the victory more important than the prowess of the army.

Although Suhail-i-Yaman is a relatively recent book written by using both facts and hearsay, it was for sometime looked upon as a standard biography of Hazrat Shah Jalal (R). The book says that the saint came from Yemen (of the Arab peninsula), but this has been proved wrong. An inscription discovered in Sylhet in 1873 categorically indicates that Shah Jalal (R) was a Kuniyayi, ie, he came from Kuniya, a township in Turkey. In the Gulzar-i-Abrar of Ghausi he is called Turkistani. There are every reasons to believe that Shah Jalal (R) came from Turkey and not from Yemen. Another inscription issued in honour of Shaikh-ul-Mashaikh Makhdum Shaikh Jalal Mujarrad bin Muhammad records that Sylhet was first conquered by Sikandar Khan Ghazi in the reign of Sultan Firuz Shah in 703 AH/1303 AD. This is also supported by Gulzar-i-Abrar.

In his travel accounts, Ibn Batuta described that Shah Jalal (R) was a great saint of hoary age and a dervish with exceptional spiritual powers. Ibn Batuta learnt that the saint had met Caliph al-Mustasim Billah at Baghdad, and that he was there at the time of the Caliph's assassination. The companions of Shah Jalal (R) later told Ibn Batuta that the saint died at the age of one hundred and fifty and that he observed fasting in almost all the days of a year. He also performed namaz throughout the night. He was thin, tall and scantily bearded.

Ibn Batuta also described some events that demonstrate the spiritual powers of the saint and noted that he had got the message of his death in the following year at Beijing. Recent studies show that Ibn Batuta visited Bengal in 1345-46 AD, which means, Shah Jalal (R) died in 1347.

Shah Jalal (R) was a disciple of Sayyid Ahmad Yesvi and belonged to the Naqshbandiya order of the sufis. His preceptor and fellow friends lived in agony and suspense in the days of turmoil following the Mongol invasion in Turkey.

The tomb of Shah Jalal (R) is visited daily by a large number of devotees. His grave is unusually large, which indicates his tall physique as described by Ibn Batuta. [Abdul Karim]

Bibliography HAR Gibb, Ibn Battuta: Travels in Asia and Africa, London 1928; 'Gulzar-i-Abrar of Ghausi', Journal of the Asiatic Society of Pakistan, II, 1959; ME Haq, A History of Sufism in Bengal, Dhaka 1975; A Karim, Social History of the Muslim in Bengal, (2nd ed), Chittagong 1985.