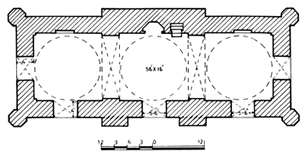 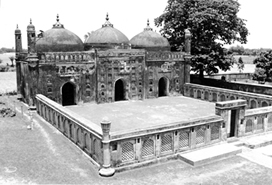 The entire building is plastered over. The eastern facade is richly panelled showing arched-niches. The parapets are decorated with a row of ornamental merlons. The interior base of the cylindrical drum below the central dome is also decorated with a frieze of merlons, all depicting rosettes at their apex. The four walls are internally ornamented with panels - rectangular and square. In addition to the three mihrab alcoves there are some subsidiary niches. One such niche to the north of the central mihrab is excessively high and wide. It is arched with a half-domed top and contains a three-stepped pulpit. More important is that its half-domed top is beautifully ornamented with muqarnas works. The triangular pendentives immediately below the drums and the half-domed top of the central mihrab niche are enriched with network design in stucco.