Shaheed Minar monument built in memory of the mother language martyrs, who were killed on 21 February 1952 during the language movement. A memorial to the martyrs was built immediately after the killings, on 23 February 1952.

The planning, selection of the site and the construction work of the memorial were done on the initiative of the students of Dhaka Medical College. The small structure of the first memorial, on a base 101/2 feet high and 6 feet wide, was constructed at the spot where the shootings had taken place: the south-eastern corner of the present Shaheed Minar premises. Immediately after construction, a plate with the words ‘Shaheed Smrtistambha’ (monument in the memory of the martyrs) was affixed to the monument. 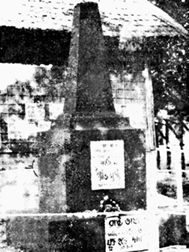 The memorial became a focal point for the city dwellers and became the symbol of protests. People thronged there in groups. The memorial was formally inaugurated by abul kalam shamsuddin, the then editor of the daily azad, on the morning of 26 February. Police cordoned the Medical College hostel that afternoon and demolished the monument. Although the monument was demolished, the Pakistani ruling coterie could not efface the memory of the martyrs. Innumerable small memorials on the same model were built all over the country, specially in the educational institutions. In 1953 the students and youth community of the country observed 21 February as 'Shaheed Dibas' (martyrs' day). A replica of the memorial in red paper was installed in 1953 in the yard of the Medical College Hostel at the spot where the first memorial had been built. It was covered with a black cloth. From that symbolic Shaheed Minar, students launched their prabhat pheri (mourning procession) on 21 February for the first time that year. The following year (1954) as well the students observed Shaheed Day in a similar manner. The United Front Government assumed power on 3 April 1954.

In the Session of 9 May the government announced that, according to their commitment in the 21-point programme, the Shaheed Minar would be built. 21 February was declared as Shaheed Day and also as a public holiday. However, the United Front Government could not execute its decision as it was ousted from power on 30 May the same year. The foundation stone of the Shaheed Minar was laid for the second time on 21 February 1956 by Abu Hossain Sarkar, the then Chief Minister of East Pakistan, along with Maulana abdul hamid khan bhasani and Hasina Begum, mother of Abul Barkat, the language martyr. Simultaneously, 21 February was formally declared Shaheed Day as well as a public holiday.

In 1957, with an Awami League government in power in East Pakistan, the construction work of the Shaheed Minar commenced in the yard of the Medical College Hostel. hamidur rahman had designed a massive Shaheed Minar complex on a large tract of land. In the design there was a half-circular column as a symbol of the mother and her martyred sons standing on the dais in the main part of the monument. Many yellow and deep blue pieces of glass were to be imbedded in the column as symbols of eyes from which the rays of the sun would be reflected. Besides, there was to be a railing adorned with the Bangla alphabet in front of the monument complex and also two footprints, one red and one black, symbolising the two opposing forces. The design also included a museum, a library and a series of mural paintings. At one end there was supposed to be an eye-shaped fountain with a high undulating platform. 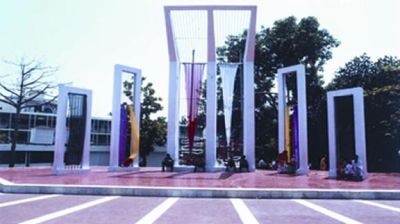 Based on this design, the construction work was started in November 1957. Hamidur Rahman, assisted by Novera Ahmed, supervised the construction. During this time the basement, platform and some of the columns were completed. The rails, footprints, some of the murals as well as three sculptures by Novera Ahmed were also finished. However, martial law was promulgated in 1958 and the construction was stopped. Despite this, people continued to visit the Shaheed Minar to place floral wreaths and hold meetings.

A committee formed in 1962 under the order of Azam Khan, the then Governor of East Pakistan, and headed by the Vice-Chancellor of Dhaka University, suggested extensive changes in the original design of the Shaheed Minar. Accordingly, the design was changed and the construction of the Shaheed Minar was summarily completed.

It was inaugurated on 21 February 1963 by Hasina Begum, the mother of Barkat. Though reduced and curtailed, the Shaheed Minar became the symbol of the spirit of the Language Movement in the mind of the people. During the war of liberation in 1971, the Pakistani army again demolished the Minar and placed a signboard there with the word 'Mosque' written on it. The mosque was not built, and in 1972, in an independent Bangladesh, initiatives were taken to construct the Shaheed Minar anew. This time also the construction was hastily completed according to the abridged design of 1963. In 1976 a new design was approved, but it was not implemented. Subsequently in 1983, the Shaheed Minar was expanded to its present dimensions.

The Shaheed Minar, with all its architectural and sculptural imperfections, still stands as a symbol of the linguistic and nationalistic struggle of Bangladeshis. [Ahmed Rafique]