Shailkupa Mosque a six domed mosque of the independent Sultanate period of Bengal. Situated at Shailkupa upazila sadar under Jhenaidaha district, it is one of the most beautiful architectural edifices of medieval Bengal. The mosque was built in c 1520 AD during the reign of Nasiruddin nusrat shah, son of Sultan Alauddin husain shah. There is no inscription indicating the date of the construction of the mosque. The mosque, built of small red brick, was originally without plaster, but now the mosque has been plastered. 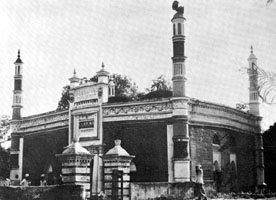 Externally the mosque measures 13.41m x 10.06m and internally 10.06m x 6.71m. The walls of the mosque are about 1.52m thick. Oblong in plan the mosque has circular towers in all four corners. all the towers are recessed into the corner of the mosque gradually tapering towards the top. Being raised above the cornice they were given the shape of minarets.

The entire tower, from the base to the apex, is decorated with nine moulding bands. Cupolas with kalasa finials crown the towers. At the eastern facade there are three archways, the central one being flanked by two side ones. There are four more archways, two each on the northern and southern sides. All the archways are of two pointed styles.

There are three recessed mihrabs at the western wall. The mihrabs were effected carving two pointed arch niches in the wall. The central mihrab is slightly extended outwards from the wall. Attached to the rectangular frame the mihrabs are internally decorated by floral and geometric designs and there are flower tubs and lotus ornamentation above the frame.

The prayer room is divided into two aisles and three bays. The room is roofed over by domes supported by arches springing from two black stone pillars. The pillars are 0.46m thick and 1.83m high and have no extra pedestal. Two-pointed arches for the domes spring from the apex of the crucified capital of the pillars. Each of the pillars creates four arches, three of which are connected to the three pilasters at the three sidewalls and the fourth one is attached to another pillar. These pillars and arches create six quadrangles that are transformed into circular bases to set up the six domes by creating pendentives in every corner. Constructed in corbel form all the pendentives are decorated with brick ornamentation in pure Bengali style. The ceiling of the dome is 6.40m high from the ground. Though the domes look quite high from within, but they are hardly visible from outside. There are also no finials over the domes to make them attractive. Northwestern side of the mosque has slightly depressed down.

There is a tank with masonry platform at the northern side of the mosque for ablution. There are epitaphs of Darwish Maulana Muhammad Arab and Wazir Shah Ali in a surrounded courtyard, 36.58m east of the mosque. This architectural edifice was about to be lost for lack of proper care and attention. The local people have renovated it in the 1940s. [Mohammad Alamgir]