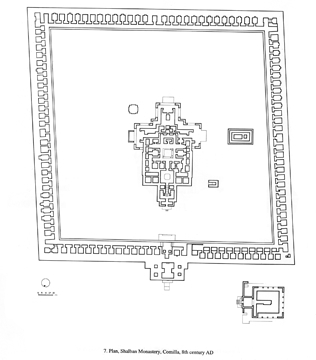 During the next two phases, that is to say, Periods IV and V (9th to 10th century AD), new floors and thresholds were built on top of earlier remains. Fireplace and ornamental brick pedestals, two interesting features noticed inside the cells, were added later during these phases. They do not belong to the original plan. They, evidently, relate to individual cooking and cult worship inside the cells by a few resident monks. There was, of course, a community kitchen and a great shrine in the establishment for all monks. Other interesting features noticed are a few flight of steps in the courtyard, grand staircases in the corner rooms, chapels in the central cells, and three corbelled niches in each cell for keeping votive images, lamps, and reading and writing materials. 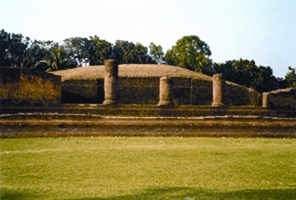 Since the Mainamati monuments are unquestionably earlier in date by about a century, and as there are a number of early and intermediary stages of development in this evolutionary process clearly traceable in Mainamati, it is reasonable to assume that Mainamati supplied prototypes of cruciform shrines not only for Paharpur and Vikramashila in eastern India but also for subsequent developments in Burma, Indonesia and Indochina.