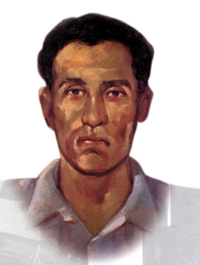 Sheikh, Birsrestha Nur Mohammad (1936-1971) Lance Nayek of East Pakistan Rifles (EPR) and a martyr in the war of liberation. Nur Mohammad Sheikh was born on 26 February 1936 at village Mahiskhali in Narail district. An orphan in childhood he had to sell his paternal landed property for his livelihood. Nur Mohammad then joined the local Ansar Force. He joined the East Pakistan Rifles on 14 March 1959. On completion of training he was posted at Dinajpur sector. During the Indo-Pak War in 1965 he was wounded in the war in Dinajpur sector. In recognition of his valour in the war he was awarded the medals 'Tamgha-e-Jang' and 'Sitara-e-Harb' by the Pakistan government. He was transferred to Jessore sector headquarters in August 1970.

Nur Mohammad joined the War of Liberation in March 1971 while on leave at his village home. During the war he fought in Sector 8 in Jessore. He was then in charge of a regular petrol force. The Pak army having taken position on three sides of the defence post suddenly managed to surround the petrol force on 5 September, and the heroic resistance that followed resulted in the martyrdom of Nur Mohammad. His dead body was recovered by his fellow soldiers and was buried at Kashipur in the border. In recognition of his valour and the highest sacrifice in the War of Liberation, he was honoured with the highest state insignia of  ‘Birsrestha’. [Md. Siddiqur Rahman]