Shipbuilding Industry an important economic and industrial sector in Bangladesh. Bangladesh is a maritime nation with 9,000 sq km of territorial waters, 720 km long coastline. It has 700 rivers that come down from the surrounding countries and which provide 24000 km long inland waterways. At present about 10,000 inland and coastal ships have been plying all over the country, which carry more than 90% of total oil product, 70% of cargo and 35% of passengers. More than 150,000 skilled and semi-skilled workers are employed in this labour intensive sector. Two million people are related directly or indirectly with shipbuilding industry. All inland and coastal ships are constructed and repaired locally in Bangladeshi shipyards. Recently Bangladesh has successfully exported her first ocean going ship to a high-end market like Denmark competing with giant competitor like China, India and Vietnam in 2008. Few local shipyards are capable of making ships up to 10,000 DWT (deadweight tonne) as per international standard.

History of Bangladeshi shipbuilding' Since ancient period, Bengal had a glorious tradition of boat and ship building. Traditional ship and wooden boat were made in Chittagong. The Moroccan traveller ibn batuta who came to Bengal in the 14th century saw numerous boats in the river carrying men and mercandise and testified to the existence of gigantic fleet of war-boats. According to the European Traveller Caesar Frederick, Chittagong was the centre of building ocean-going vessels in the mid 15th century. In the 17th century, the ship building institutions of Chittagong are reported to have built a complete fleet of war-boats for the Sultan of Turkey. During the Mughal period, Bengal is said to have taken the lead in building ships and boats. 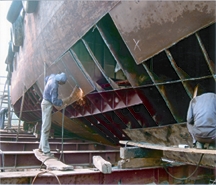 The Mughal naval force had a large number of ships built at Chittagong. The British Navy used warships built at Chittagong in the famous Battle of Trafalgar in 1805. During the first half of the 19th century, the shipyards at Chittagong built ships up to 1000 DWT. During Pakistan period public sector enterprises dominated the shipbuilding Industry. There are more than fifty shipyards concentrated at Dhaka, Chittagong, Narayanganj, Barisal and Khulna regions where inland costal and fishing fleets are being built. In 1979, FAO funded contract for supply of 8 food grain carrying vessels to Bangladesh Inland Water Transport Corporation (BIWTC) was secured by Highspeed Shipyard, Narayanganj. Mitsui Engineering and Shipbuilding Industry of Japan entered into a joint venture in shipbuilding with High Speed Shipyard and constructed 4 deep sea fishing vessels. Recently some shipbuilding industries including Ananda Shipyard and Slipways Ltd, Dhaka and Western Marine Shipyard Ltd, Chittagong have come up with modern shipbuilding facilities that enabled them to receive export orders. However in 2008, Ananda shipyard exported her first ocean going ship Stilla Marriage to Denmark and earned reputation for Bangladesh as the ship exporting country in the world.

Present status of Bangladeshi shipbuilding industry There are more than fifty shipyards in Bangladesh and a hundred of shipbuilders or contractors and marine workshops are actively involved in shipbuilding activities. 70% of the shipyards are located in and around Dhaka, 20% are in Chittagong and 10% are in Khulna and Barisal. Almost all inland/coastal/bay crossing ships are constructed and repaired locally in these shipyards. Local shipyards can design and fabricate ship up to 3500 DWT to fulfill the demand of local market. Most of the Shipyards are operating under individual management with nominal supervision of government. All inland and coastal ships are built by local shipyards, and the number of vessels built per year counts an average of 250. They employ huge number of skilled and unskilled labour. Most of the private shipyards use plate, engine, component and machinery of old merchant ships which are collected from Bhatiary ship breaking industries. 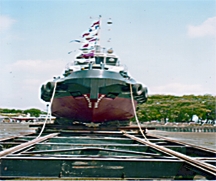 Cost analysis of export ship manufacture Additional financial cost of ship manufacture in Bangladesh is about 15 to 20% (Bank Interest 3 to 6% + Bank Guarantee 8 to 16% + L/C Commission 4 to 8% + other charges 1%) higher than the other competing countries like China, Korea, Japan, India, Vietnam etc. Again tax on imported shipbuilding machineries and components enhances the costing to a further extent. On the other hand, India has only 10% financing cost and a 30% cash subsidy and is altogether about 30-40% ahead in ship building business of Bangladesh. So, only low labour cost can not promote survival of Bangladesh in the shipbuilding industry. Again, at present Bangladeshi component manufacturers and shipyards can manufacture 50% of the total material, machineries and equipments for the local inland and coastal vessels built in Bangladesh and the rest can be procured either from foreign market or second hand market at Bhitiary. This proportion for an international classed vessel to be built in Bangladesh is at present 10-15%, which if properly ventured by experienced foreign manufacturer can be taken to 45%. Share of the local contribution for export quality ship built by the Bangladeshi shipyards is about 40% of total ships' cost.

Global trend of shipbuilding industry In the past, shipbuilding industry of the East enjoyed superiority. But after World War I, America gets superiority in the industry. However, after World War II shipbuilding becomes a European industry in which Britain took the lead between 1960s and 1980s. This is followed by Japan (1960s to 1980s). Japan established herself as number one shipbuilding nation by manufacturing oil carriers for the world. Then South Korea took the lead. Therefore the world shipbuilding market is moving toward the East. Now rapid growth in market share is observed in China where labor costs playing a vital role. The other emerging forces are Vietnam and India. Now India ranked as fifth largest shipbuilding nation in the world. Thus, shipbuilding has shifted from Europe to Asia, where the single most driving force behind this phenomenon is cheep labour cost.

Demand of global shipbuilding Shipyards in Japan, China, Korea, India, Singapore and Vietnam are booked up to 2012 with minor exception as some yards have been affected by the cancellation of orders due to economic recession. Presently the demand for new shipbuilding has superceded the capacity of the shipyards. However, traditional market leaders of world shipbuilding industry are over-booked primarily for construction of large ships. So the ships' buyers/ entrepreneurs are in search of new, suitable and reliable markets in Vietnam, Bangladesh, India, Brazil, Pakistan, Turkey, etc. As a result shipbuilding capacities are rapidly expanding in Asian Countries. It is estimated that shipbuilding demand increases 5% annually and number of shipyards is not increasing. Again new regulations of International Maritime Orgainsation (IMO) have made it almost impossible to have the older ships upgraded and thus have to be replaced by new ships. Presently world turnover and movement of goods has been increased manifold in the last few years. As a result, demand of ship and shipbuilding activities have been increased manifold.

Prospect of Bangladeshi shipbuilding As per World Trade Organisation (WTO), global shipbuilding market size is US$ 1,600 billion. If only 1% market share can be captured by Bangladesh, it will be worth US$ 16 billion. If we can grab 1% of the global order for only small ships market the amount will be worth US$ 4 billion. Two leading local shipyards, Ananda and Western Marine have bagged orders to make 41 small vessels worth about US$ 0.6 billion mainly from European buyers. Again, by 2012 the world will need more than 10000 vessels, mostly small to medium sized and all single hull tanker will be replaced by double hull as per IMO rules. So small and medium shipbuilding market is flourishing and future of Bangladeshi shipbuilding is brightening day by day. Bangladesh is suitable for small and medium combine cargo vessel, multipurpose vessel and oil tanker up to 15000 DWT and some extend to 25000 DWT, However it predicts that small cargo and containership market will also be feasible for Bangladesh in coming years.

Global recession and position of Bangladesh It is nice to mention that the market of small-ships and vessels of various types is remaining unaffected by on going global recession. Recession has caused a drop in demand for large vessels. Global giant shipbuilders cannot capitalize on this new market demand, as their projects will prove to be unfeasible because of the high overhead costs they already bearded. So far Bangladesh does not face any blow like cancellation of orders.

Expert views that orders for small ships have gone up because of the global financial crisis; so demand for small vessels will continue and activities of Bangladeshi shipyard will remain on. It is good time for us to prepare for the future with the help of government so that local shipyards can receive orders after recovery from current recession.

Shipbuilding is a semi high-tech and capital-intensive sector. It is both promising and challenging industry in the World. Bangladeshi shipbuilding is not in competitive and international standard and also is in vulnerable stage. [Khandakar Akhter Hossain]