Siddiqui, MR (1926-1992) industrialist, politician. His full name is Mustafizur Rahman Siddiqui. He was born on 1 March 1926 at Sitakunda in Chittagong district. His father Muhammad Hossain Chowdhury was a member of Chittagong District Board and his mother was Mustafa Begum. MR Siddiqui had his primary and secondary education at Sitakunda and obtained his MCom degree from Calcutta University in 1947. He was a Lecturer in the Department of Commerce in Dhaka University from 1948 to 1950. In 1954 he got a degree in Taxation and Chartered Accountancy from the Institute of Chartered Accountants of England and Wales. The same year he was elected as a member of Royal Economics Society and Royal Statistics Society of London. 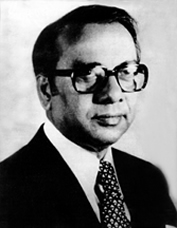 After the formation of mujibnagar government on 17 April 1971, he was appointed as chairman of the Eastern Zonal Command. In July he visited America as a representative of Mujibnagar Government for creating public opinion abroad in favour of the Bangladesh Government in exile.

In 1972 M.R Siddiqui was included in the cabinet of Bangabandhu in charge of the Ministry of Commerce and External Trade. He was elected a member of the Jatiya Sangsad in 1973. He visited the United States of Amerca, Canada, United Kingdom, Italy, France and West Germany as the special representative of the Prime Minister in 1973. During his visit, he was successful in getting the support and assistance of these countries through diplomatic activities in repatriation of the stranded Bangladeshis from Pakistan. In 1975 he was appointed as the Ambassador of Bangladesh to the United States of America and Mexico. He retired from active politics in 1980.

In 1958 MR Siddiqui joined the Lions Movement in East Pakistan. During the devastating cyclone of 1960, he became active in relief work and rehabilitation of the cyclone affected people in Chittagong. In recognition of this humanitarian service the International Lions Club honoured him with the Lion Humanitarian Award in 1962. He was elected as the district governor of Provincial Lion Zila 315 in 1962-63 and 1963-64, and governor of Bangladesh Lions Zila-315 in 1972-73 and in 1973-1974. He established Chittagong Lions Eye Hospital in 1963 and Chittagong Lions Foundation in 1966. Later he established Bangladesh Lions Foundation and as its chairman established Lions Eye Hospital in 1983 at Agargaon, Dhaka. Besides he was the chairman of OISCA (Bangladesh Chapter), chairman of Bangladesh Pharmaceutical Industries Association (1984), convenor of Bangladesh Chamber of Industries (1985), chairman of Metropolitan Chamber of Commerce and Industries (1985 and 1986), chairman of Underprivileged Children's Education Programme (UCEP) Bangladesh (1988) and chairman of Bangladesh-Japan Friendship Society. He established Latifa Siddiqui Girls' High School (1973) and Latifa Siddiqui Degree College (1985) at Kumira in Sitakunda. He died on 6 February 1992. [Mohammad Mostafa Kamal]