Silkworm (reshompoka) name for the larva of any of the lepidopteran insect that produce natural silk of commercial value. They may be mulberry silkworm, eg Bombyx mori (family Bombycidae), and non-mulberry silk worm, viz the Eri, Samia cynthia ricini, Muga, Antheraea assama, and Tasar, A. mylitta and A. paphia (family Saturniidae). B. mori, which is believed to have been derived from the original mandarins silkworm, B. mandarina is fully domesticated and is the most important silk-producing insect, and in the global textile parlance, the term 'silk' refers to the mulberry silk because the bulk of world silk production, about 95%, is of mulberry origin. Besides the mulberry silkworm, the Eri silkworm, another domesticated species, ranks second in silk production. The Muga is semi-domesticated, and the Tasar is wild. The rearing and raising of silkworm is known as sericulture.

All the silkworms are holometabolous, and the life-cycle is represented by: egg larva pupa adult. It is at the larval stage that the cocoon is formed, wherefrom silk is spinned. The various species of silkworm raised today is distinguished by the quality of the silk they produce, the type of leaves on which they feed, and the number of breeding per year.

Silk is the lustrous fibre secreted by the silkgland of the worm. Silk possesses a few unique properties: it is the finest animal fibre (diam.10-12 m); it has no cellular structure since, it has never been part of body tissue; and it is a continuous thread. Silk proteins are synthesized by the silkworm from the leaves of the host plants during the larval life in two glands which run along the body on either side. When the worms attain maturity, and the silkglands are fully developed, they start ejecting the silk fluids from the glands through a spinneret at its mouth. The secreted silk fluid hardens into a fine filament on coming in contact with the air. The silk fiber forms a cocoon- a protective covering around the worm at the pupal stage, from which silk is collected.

In Bangladesh, only B. mori is reared on a commercial scale. Multivoltine races of the mulberry silkworm are almost exclusively raised for commercial use. However, a few bivoltine worms are grown on an experimental basis. S. c. ricini had been reared on an experimental basis at the University of Rajshahi, Bangladesh Agricultural University, Mymensingh, and the Institute of Food and Radiation Biology, Savar, Dhaka. At present the Eri silkworm is not of commercial importance to the silk farmers of Bangladesh.

The mulberry silkworm has been domesticated for well over 4000 years. The major diseases of these worms are pebrine, flacherie, muscardine, and grasserie. They are also attacked by a number of pests and parasites, eg the Uzi fly, Exorista sorbillans (Diptera: Tachinidae), ants, crickets, earwigs, lizards, squirrels, and rats. The Uzi flies are the most destructive pests of silkworms throughout the tropical countries, including Bangladesh.

Sericulture (reshompalan) raising of silkworms for the production of raw silk. The production of silk or sericulture was invented in China. The Chinese kept its techniques secret for centuries, although eventually they were smuggled out of the country. Besides Bangladesh, Italy, Franch, Japan, Korea, and India have developed silk industries. Bangladesh produces about 2,8000 lbs (12,700 kg) of silk yarn annually. Sericulture comprises three distinct phases, namely: (a) cultivation of mulberry plants (Moriculture); (b) rearing of silkworms; and (c) reeling of cocoons for the manufacture of fabrics. While the first two sectors are agricultural in nature, reeling of cocoons to spin yarn is distinctly industrial in character and is carried out either in cottage-type establishments or in large-scale factories called 'filatures'.

The commercially-important silkworm species include: Bombyx mori, Samia cynthia ricini, Antheraea assama, A. paphia, A. mylitta, etc. Among these silk-producing insects, the mulberry silkworm (B. mori) is the most widely utilized, intensively cultured, and its rearing techniques are the most improved. B. mori is of Asian origin, and its larva produces the finest silk. It is widely raised in Bangladesh, particularly in the districts of Rajshahi and Nawabganj. 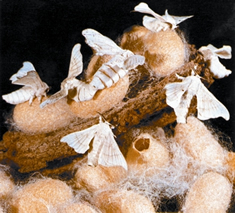 Mulberry constitutes practically the sole food plant of the silkworms. It is a very hardy plant of the genus Morus 'under the family Moraceae. In Bangladesh M. alba and M. indica are cultivated for silkworm rearing. For a successful sericulture it is essential that fresh mulberry leaves to be fed to the silkworms. There are a number of mulberry diseases, viz powdery mildew, caused by a fungal pathogen Phyllactinia corylea, several leaf spot diseases, the most common being due to the fungus, Cercospora moricola. Several pests also infest mulberry plants, such as the hairy caterpillar, Spilarctia obliqua, the cutworm, Spodoptera litura, the stemborer, Apiona germarii, grasshopper, Neorthocris acuticeps nilgriensis, thrips, Pseudodendrothrips mori, Gallmidge, Diplosis mori, termites, etc. Diseases and pests often reduce the yield of mulberry leaves significantly.

The larva constitutes the only feeding stage in silkworms. The silk production duration of the immature stages or the resistance to diseases are all influenced by nutrition. After hatching from egg, the worm starts feeding on mulberry leaves and this continues up to the end of the larval stage when it builds a silken abode- the cocoon- from the secretion of the silkgland. The larva enters the pupal stage within the cocoon when the reproductive and adult organs are formed. The insects then emerge out from the cocoons. Soon after emergence the adults mate and the life-cycle is repeated.

The essential nutrients for growth of silkworms are carbohydrates, eg glucose, fructose, maltose, sucrose, etc; amino acids; fats and oils; and several vitamins. Hormones control silkgland function, prevent their degeneration and can indirectly cause an increase in silk production.

Filature comprises all processes involved in the production of raw silk from the cocoon, viz drying, storing, cooking, reeling, skeining, booking, and baling. The cocoons are collected after 3-4 days of mounting. They are sun-dried or oven-dried, and then cooked in water as a preparatory procedure for reeling in order to soften the cocoons. In Bangladesh, reeling is principally done with the help of a country 'charka'- a very simple, manually operated appliance which can be manufactured by the village artisan. Reeling processes are, however, mechanized in large factories. Raw silk is taken from the reel and rewound, then skeins are prepared which are bound into books and packed into bales.

A number of high-yielding mulberry varieties have been developed by the Bangladesh Sericulture Research and Training Institute (BSRTI), Rajshahi but most of them are confined to the Research Institute only. Necessary policies/decision need to be adopted for release and cultivation of these varieties for commercial leaf production.

The BSRTI has also developed and released several high-yielding multivoltine silkworm breeds, including certain resistant high-yielding races for Jaistha and Bhaduri seasons. A number of multi bivoltine and multi multivoltine combinations have been suggested for better performance under field conditions.

The education and training of the farmers are important for developing sericulture. Proper training should be extended to the extension workers as well as the technical staff. In addition, instrumentation and extension of existing research laboratories with modern equipment, and sufficient financing, both to the researchers and farmers would likely improve the present situation. [Md Ataur Rahman Khan]