Somapura Mahavihara was one of the most famous Buddhist monastic institutions of ancient Bengal. The excavated monastic complex at paharpur has been identified with the Somapura Mahavihara built by the second Pala king dharmapala (c 781-821 AD). Some clay seals from the ruins bear the inscription Shri-Somapure-Shri-Dharmapaladeva-Mahavihariyarya-bhiksu-sangghasya. Taranatha and other Tibetan sources mention that devapala built it after his conquest of varendra. Possibly what Dharmapala undertook may have received finishing touches during the reign of his successor Devapala. The Pala rulers were devout Buddhists and they founded a number of monasteries throughout their growing empire. Some of them became great centres of learning and their reputation quickly spread throughout the length and breadth of Asia. Somapura Mahavihara's close relationship with the ruling dynasty implied that it shared the political ups and downs of its benefactors. 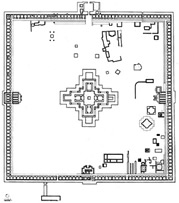 The Paharpur pillar inscription of the 5th regnal year of Mahendrapala, found in the ruins of the main temple, records the name of Bhiksu Ajayagarbha. Mahendrapala of this inscription has to be identified with the king of the same name, whose recently discovered jagjivanpur copperplate has put it beyond doubt that he belonged to the pala dynasty, son and successor of Devapala. So it is proved that Mahendrapala continued patronage to this monastery. The monastery was repaired and renovated during the reign of mahipala i (c 995-1043 AD), and it is recorded in the Tibetan work, Pag Sam Jon Zang that the same king used to visit Somapura Vihara to offer his homage to it.

The monastery flourished until the 11th century AD when it was destroyed by fire during an invasion by a vangala army, possibly the army of the Varman rulers of vanga. This is recorded in the Nalanda inscription of Vipulashrimitra, where it is also recorded that Karunashrimitra, ancestor of Vipulasrimitra, lost his life in the fire as he refused to leave the monastery. About a century later Vipulasrimitra restored the former glory of the Vihara through renovation work and by building a temple of Tara. After the renovation the magnificence of the temple is alluded by the expression jagatang netraika vishrama bhuh (a singular feast to the eyes of the world). 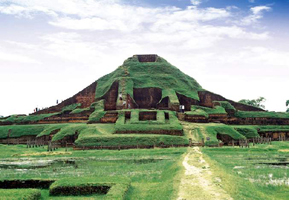 It seems that the advent of the Karnatadeshatagata Brahmaksatriya Senas in the second half of the 12th century marked the beginning of the end of the Buddhist monastery. Somapura Mahavihara gradually declined and was finally abandoned during the 13th century, when the area came under Muslim occupation.

Tibetan works (Tibetan translations of Dharmakayavidhi and Madhyamaka Ratnapradipa, Taranatha's history and Pag-Sam-Jon-Zang) record the glory of Somapura Mahavihara. Many Tibetan monks visited the monastery during the period between 9th and 12th century AD. atish dipankar srijnan stayed here for many years and translated the Madhyamaka Ratnapradipa into Tibetan. His spiritual preceptor, Ratnakara Shanti was the sthavira of the vihara. Mahapanditacharya Bodhibhadra was a resident monk of this vihara. Several other scholars like Kalamahapada, Viryendra and Karunashrimitra spent some part of their lives at this monastery. [AM Chowdhury]