Sonarang Twin Temples located in Sonarang village under Tongibari upazila of Munshiganj district. Two temples stand side by side on a single masonry platform surrounded by a moat on three sides and an access path on the eastern side. Of the two, the western one is a Kali temple and the eastern one is a Siva temple. The western temple, loftier than the eastern one, is about 15m high over the square sanctum, and measures 5.35 sq m and has a 1.94m wide veranda. A low hemispherical dome covers the square sanctuary, over which rises an octagonal shikhara crowned by the usual pinnacle with kalsa finials. This terminates in a trident fixed with an iron rod. 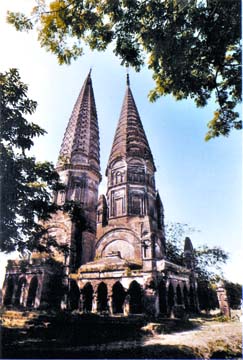 The outer surface of the sikhara is decorated with a semi-circular arched pattern in plaster, which is repeated on all sides. The entire sikhara is dotted with three pigeonholes under each arch pattern.

The main sanctuary has two archways, one each on the south and west sides, flanked by arched panels on both sides, and a pattern of three arches on the other two sides. The western entrance consists of a two-centred arch. The top of the archway is decorated with a frieze of blind merlons. In front of the sanctum, the veranda is covered with a flat roof supported on columns, It has three arched openings on the south, one each on its east and west side.

The octagonal surface between the sanctuary and lofty sikhara is divided into two areas. The lower stage is relieved with small rectangular panels in plaster while the upper stage is decorated with a window pattern within large rectangular panels in plaster that is topped with semi-circular arches. At the top of the middle octagonal area there are two moulded bands. The sikhara is decorated with reiterated curvilinear panels rising upward vertically.

There are four miniature sikharas (ratna) on four corners of the square sanctum around the lofty central sikhara, and another four on the veranda, two of which have now disappeared, thus making it a navaratna.

The smaller eastern temple is more elegant in appearance. A square building, the sanctum measures 4m a side; A 1.5m wide veranda runs around the sanctum. The sanctuary is covered with a low dome which rests directly on the four walls and squinches in the upper angles. The surrounding veranda is covered with four chau-chala vaults and four small vaults on their four corners. There are five arched-openings in each side of the veranda; the tri-foiled arches spring from columns. The main sanctuary has a four-centred archway on its south side and a two-centred archway on the east side. Inside the western wall is an altar and there are three alcoves in the north wall. It is also a navaratna consisting of four small ratnas over the square sanctum around the lofty sikhara and four others over the four corners of the veranda.

Other features and decoration of the eastern temple bear close similarity to the western one. But there is a difference; each plastered arch pattern on the surface of the entire sikhara is crowned with a frieze of expanded serpent hood motif.

From stone inscriptions fixed over the temples, it appears that one Rupchandra of nebulous identity had built the large Kali temple in 1843 AD and the smaller one in 1886 AD. [Muhammed Nasir Uddin]