Sreepur Upazila (gazipur district)  area 465.24 sq km, located in between 24°01' and 24°21' north latitudes and in between 90°18' and 90°33' east longitudes. It is bounded by bhaluka and gaffargaon upazilas on the north, gazipur sadar and kaliganj upazilas on the south, kapasia upazila on the east, kaliakair and sakhipur upazilas on the west.

Administration Sreepur Thana was formed in 1933 and it was turned into an upazila in 1984. 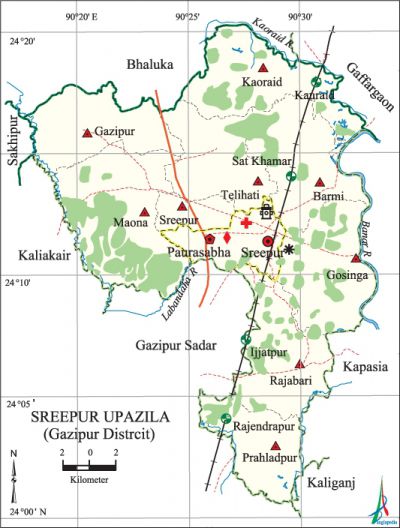 Historical events Sreepur is presumed to be 'named after Raja Sreepal. The local Bhuiyans fought at Karnapur to resist the onrush of the Mughal army. Possibly the Karnapur Fort and the adjacent dighi bear testimony to that incidence. At the end of March 1971, 60 freedom fighters launched an attack on Rajendrapur, Joydebpur Peelkhana and at Ordnance factory, and captured a huge amount of arms and ammunitions. The Pak army conducted mass killing at Sreepur College campus and at Satkhamair on 17 June. Many people were the victim of explosion of 7 bombs on 10 December in the upazila.