Srikrishnakirtan a Vaisvava poetical work by baru chandidas, is believed to have been written in the pre-Chaitanya era. It is considered to be the most significant work next to charyapada in bangla literature. Basanta Ranjan Ray Bidvadvallabh retrieved the puthi (manuscript) of the work from the collection of Debendranath Mukhopadhyay, a resident of Kankilya village of Vishnupur in Bankura district, in 1316 of the Bangla calendar. Since the puthi was found shorn of its initial pages, its name could not be ascertained. It, however, came to be known as Shrikrsvakirtan because it deals with the lila (dalliance) of krishna. The publication of the puthi, by the vangiya sahitya prishad, edited by Basanta Ranjan Ray, in 1323 of the Bangla calendar drew the attention of scholars. 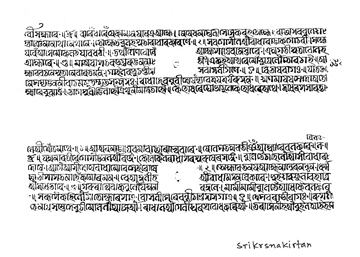 The book gave some new pointers to the origin and development of the bangla language. Shrikrsnakirtan is a lyrical composition, embodying the love affair between radha and Krishna. The manuscript has 418 lyrics and is divided into 13 sections, namely, Janma (birth), Tamvula (piper betel), Dana (donation), Nauka (boat), Bhara (weight), Chhatra (umbrella), Vrindabana, Kaliyadamana (coercion of Kaliya, a kind of snake in Hindu mythology), Yamuna (Jamuna), Hara (necklace), Bana (shaft), Bangshi (flute) and Biraha (estrangement of Radha). Although the story is modelled on the Bhagavata, it drew heavily from the puranas and gitagovindam by jaydev. The story-with its three major characters, Krishna, Radha and Badai (the messenger)-shows its characters interacting in a plot of full actions and counter-actions. All this has added to the dramatic quality of the work. Composed in payar and tripadi meters, the work is based on erotic sentiments. [Dulal Bhowmik]