Suhrawardy, Huseyn Shaheed (1892-1963) politician, Prime Minister of Pakistan. Born of a distinguished family of Midnapur in West Bengal in 1892, HS Suhrawardy obtained BSc (Hons.) and BCL degrees from Oxford University, and later on called to the Bar at the Gray's Inn, London. In 1920 he returned to India and got involved in active politics. 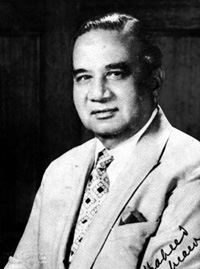 During his political career, Suhrawardy held various important offices including the deputy mayoralty of the Calcutta Corporation in 1924, Labour and Commerce Minister in AK Fazlul Huq’s Praja-League coalition government formed following the 1937 elections, Civil Supplies Minister in the Khwaja Nazimuddin Ministry during 1943-1945, the Prime Minister (chief minister) of undivided Bengal during 1946-1947, Law Minister in Mohammad Ali’s Cabinet in Pakistan during 1954-1955 and the Prime Minister of Pakistan during 1956-1957. Huseyn Shaheed Suhrawardy

Suhrawardy was an able political organiser. He proved his ability while he had been the general secretary of the Calcutta Khilafat Committee in the 1920s. Starting his practical political life as a labour leader in Calcutta, within a short period of time he succeeded in organising as many as 36 trade unions among seamen, railway employees, jute and cotton mills workers, rickshaw pullers, cart drivers, etc.

Mohammed Ali Jinnah initiated a move to reinvigorate the Muslim League in order to contest the ensuing elections as an All India body of the Indian Muslims. At the call of Jinnah, Suhrawardy and his newly founded party joined his fold. It is thought that mostly due to Suhrawardy's organisational ability the muslim league was able to form a coalition ministry with Fazlul Huq's krishak praja party winning 39 seats on its own out of 121 Muslim seats. As its general secretary from 1937-1943, Suhrawardy was engaged in organising the Bengal Provincial Muslim League throughout the length and breadth of the province.

Suhrawardy led the campaign against Fazlul Huq causing the collapse of his Ministry (1941-1943). He was the architect of the Muslim League's comprehensive victory in Bengal in the 1946 elections in which it secured 114 seats out of 121 reserved seats. This electoral success was seen by many as a justification of the Muslim demand for Pakistan.

Within a period of seven years from the establishment of Pakistan, the Muslim League was routed from East Bengal at the hands of the united front in the first provincial elections held in 1954, in which Suhrawardy had a prominent role. He was one the leaders of the anti-Ayub united movement during 1962-63 under the banner of National Democratic Front (NDF).

Before partition, Suhrawardy upheld the interests of the Muslim community. In 1932 he attended the third Round Table Conference in London as a representative of his community. He was an ardent supporter of the Separate Electorate System for the Muslims. Suhrawardy was the mover of official resolution of the Delhi Muslim Legislators' Convention held on 7-9 April 1946 by the initiative of Muhammad Ali Jinnah. During his Chief Ministership there occurred the 'Great Calcutta Killings' on the occasion of the Muslim League's direct action day (16 August 1946) in support of the demand for Pakistan.

On the eve of the 1947 partition Suhrawardy envisioned the establishment of a state in Eastern India comprising the whole of Bengal and Assam and the adjoining districts of Bihar. This came to be known as his scheme for Greater Independent Bengal. As it is widely known, on the eve of the 1947 partition Suhrawardy in collaboration with some Bangali Hindu leaders, namely, Sarat Chandra Bose, Kiran Shankar Roy and Satya Ranjan Bakshi initiated a move for a United Independent Bengal as a third dominion alongside India and Pakistan. abul hashim, the then secretary of the Bengal Provincial Muslim League, also extended his full support to the project. However, it was unsuccessful.

Unlike many others, Suhrawardy did not come to Pakistan immediately after partition. Rather he stayed back in Kolkata engaging himself in a peace mission along with Gandhi. On the other hand, his relation with the Muslim League high command, now at the helm of affairs of the new state of Pakistan, was far from cordial. In 1949, his membership of the Pakistan Constituent Assembly was terminated by the Liaquat government on a plea of not being a permanent resident of the country.

Later on when Suhrawardy involved himself in Pakistan politics he was in favour of solving the Bangali-non-Bangali problems within the framework of united Pakistan on the basis of equal rights and power-sharing. Thus, he became a wholehearted supporter of the parity formula between the two wings, and the creation of one unit in West Pakistan.

Suhrawardy was a firm believer in constitutional rule. This led him to join Mohammad Ali's 'Cabinet of Talents' in 1954 as Law Minister ignoring the initial reservation of his party.

He made a significant contribution to the framing of the 1956 Constitution of Pakistan. As Law Minister, he played a leading role in the signing of the 1955 Muree Pact between the leaders of the two wings of Pakistan which paved the way for the formulation of the Constitution.

As a politician, Suhrawardy was reputed for his pragmatism. For instance, in view of the overall backwardness of the Bengal Muslim community, he was a staunch supporter of separate electorate for them. However, as soon as Pakistan was established he opted for joint electorate holding the view that this was essential for the growth of a common nationhood among peoples irrespective of caste, creed, colour and religion. During his Premiership he got a bill adopted to this effect in the National Assembly of Pakistan. Suhrawardy breathed his last on 5 December 1963. [Harun-or-Rashid]