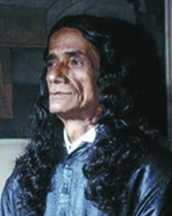 Sultan, SM (1923-1994) a renowned painter. His full name was Sheikh Mohammad Sultan but he is more widely known as SM Sultan. He was born on 10 August 1923 at Masimdia, a village in Narail district. His father worked as a mason, and Sultan joined him after five years of schooling at the Victoria Collegiate School in Narail. Sultan also began to draw the buildings his father used to work on and thus developed a liking for art. Sultan knew that an art education was only possible in Calcutta, but family hardship stood in the way. It was then that the zamindar of the area, Dhirendranath Roy offered his help. With monetary support from the zamindar, Sultan went to Calcutta in 1938.

But Sultan did not have the requirements for admission into the Government School of Art. With the help of another patron, Shahid Suhrawardy (1890-1965), who was a member of the governing body of the School, Sultan entered the Art School. Suhrawardy also offered him accommodation in his house, and the use of his own library. Sultan however did not complete his education. After three years in the school, he left and chose to work as a freelance artist.

Sultan had a strong Bohemian streak in his character and something of a wanderer. He soon took to the road, traveling to different places of India. For a means of living, he drew the portraits of allied soldiers who had camped at different places in India. He held the first exhibition of his artwork in Simla in 1946, but no work from this period survives, not even photographs, as Sultan was totally indifferent to preservation of his work.

For a time, Sultan lived and worked in Kashmir - mostly landscapes and portraits. Then, after the partition of the subcontinent in 1947, he returned to Narail. Then again, in 1951, he left for Karachi. There he taught as an art teacher at a school, and came in contact with artists like Abdur Rahman Chughtai and Shaker Ali, with whom he developed lasting friendship. In 1950 Sultan had gone to USA - exhibiting his work in New York, Washington, Chicago, and Boston, and later in London. In 1953 he returned to Narail. There he built a school for children, and a menagerie. He lived in a house full of cats and snakes. Except for occasional visits to Dhaka (where he had his first exhibition in 1976) he lived in the quiet isolation of his house. SM Sultan

Chardakhal, Oil painting on board, 1976 by SM Sultan

On first looking at SM Sultan's paintings, one gets the impression of vastness and strength. His canvas is large, like a spacious stage where life's dramas are played out. The cast of the drama consists of agricultural labourers, fishermen, simple householders, and toiling men and women. The men pose an enigma, since their large muscular and sinewy bodies contrast oddly with the emaciated physique of real life farmers and fishermen wasted by hard labour and hunger. Yet, in painting after painting, mostly in oil, but some in striking watercolours, Sultan painted the same human figures, symbolically suggesting the possibility of a dream rather than reality. Sultan believed in an arcadia where happiness and contentment would reign, yet was acutely aware of the exploitation, violence and deprivation that were the daily fare of the life of the villagers.

The tension between expectation and reality is a strong undercurrent in his paintings, sometimes ironising his contrasted studies of innocence and deceit. His strong-bodied men fight with spears for a newly risen sandbank, or kill a fellow villager in a clan war yet, in moments of domestic repose; they revert to their roles of caring fathers or husbands. At times, they turn into thinking figures, as in Reminiscence. His men are drawn in the European Renaissance tradition while his women- supple-breasted and graceful- belongs to the old Indian tradition. Instead of delicate lines however, Sultan uses strong curved lines, and flat body tones so that they do not stand apart from the crowd of active males.

Sultan's watercolors are bright and lively, but treat the same theme - nature and rural life. They contrast sharply with the often drab and flat oils painted in deep colours. Sultan tended to work heavily all over his canvas without living any empty space. His drawings, however, are masterful in their economy and compactness. The lines are powerful and full blown. In his later works though, the composition is less tight and focused, perhaps a sign that Sultan was growing a little impatient with the reality of his time. [Syed Manzoorul Islam]