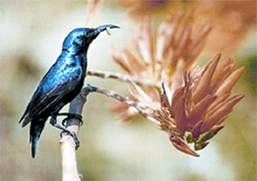 Sunbird (mautushi) group of birds, strongly associated with flowers, with long, slender, downwardly curved bills and tubular tongues. There are about 116 sunbirds of the family Nectariniidae, order Passeriformes. They are very colourful, active species, living mostly in Africa but extending throughout the Old World tropics to Australia. In Bangladesh there are seven species, of which four are migratory. They are forest-, brush- and even garden-haunting birds. The males of many species have brilliant colours; iridescent blues, purples and greens with patches of yellow, red and black are common. However, some species are dull coloured, as the females usually are. They flit about actively, perching among the blossoms and probing into the flowers for their food of small insects and nectar.

The usual type of nest is an oval, pensile structure attached to a twig. Breed as monogamous pairs; female builds the nest and incubates the eggs; eggs are usually spotted and two in number. These birds kinship with flowerpeckers is so close that the two groups are now combined in the family Nectariniidae.