Sundari Local name of the dominant plant species, Heritiera fomes, of the family Sterculiaceae, in the Sundarbans, the mangrove forests of the southern districts. The species is distributed up to about 70 per cent of the forest.

The name Sundarbans is supposed to be derived from the name of the plant, Sundari. It is adapted to flourishing high tide once dominated in the forest, and to the low saline and freshwater zone. The other species of Sundari, H. littoralis, is mostly found in the western part of the Sundarbans. 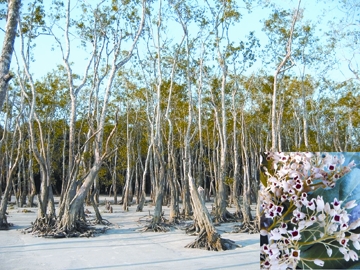 The tree may grow up to 25 m; trunk straight; leaves elliptic; roots with pneumatophores and blind root sucker; bell-shaped flowers are small, about 5 mm, unisexual, orange to pinkish; fruits are formed in clusters. The tree is the chief source of timber among the people of the surrounding districts of the Sundarbans; the annual production is about 250,000 cu ft; wood is hard, red in colour, used mostly in boat building, and in making hard-board, furniture, etc; wood also yields good quality charcoal. The Sundari plants are declining because of overexploitation, and also due to top dying diseases; about 50 per cent of the trees suffer from top dying diseases; increased salinity is also considered responsible for the decline. [Mostafa Kamal Pasha]

Top dying disease name of a disease of sundri (H. fomes) trees showing symptoms from the top of the main stem of the affected plant and gradual progression of the symptoms downward. Unlike the die back symptoms of other trees, top dying affected trees do not show epichromic branches and formation of new leaves from the immediate lower part of the affected areas of the main stem. The affected plant looks like leafless bald headed one, distinguishable from the other healthy ones. This symptom is often associated with one or a few swellings on the diseased stem in the form of knots. About 18 percent of the Sundri trees of the mangrove have been affected and thus the disease poses a threat in terms of economic loss in millions of dollars.

Possible reason(s) of the disease could not be ascertained during investigations carried out for the last two decades. Most of the researchers/ecologists point out to the conjugate effects of a number of ecological factors that allow infection and colonization of microbes and invasion of insect pests.

Survey conducted by Overseas Development Authority (ODA) reported that almost all the compartments of the Sundarbans, are affected by the disease in various degrees. Different investigators consider the following factors to be responsible for the incidence of the top dying disease: increase in salinity of soil and water, and decrease in flow of fresh water from the upstreams; increase in siltation in the banks of the rivers and channels; decrease in mineral nutrients in the forest floor; attack by insect pests at the top of the plant or fungal/microbial infection at the root region. It has been reported that the frequency of top dying affected trees are greater at the bank of rivers, canals and creeks. It is suggested that careful extraction of top dying affected Sundri and replacement with suitable species may be useful in the management of the disease. [Abul Khair]