Supreme Court of Judicature commonly called Supreme Court or Calcutta Supreme Court was founded under the Regulating Act of 1773. It took the place of the former Mayor's Court with more elaborate machinery. The Court was constituted of a Chief Justice and three pusne judges appointed by the King from barristers of at least five years experience. The authority of these judges was like those of King's Bench in England. The admission of attorneys and advocates into the Supreme Court lay in their hands. The salary of the Chief Justice was fixed at 8000 sterling a year, and of three pusne judges 6000 sterling each a year. Engaging in commercial pursuits and receiving presents, which were common practices among the company servants of the time, were strictly forbidden and it was expressly mentioned in their agreements with the government. It had the functions of a Court of Equity according to the rules of the English High Court of Chancery. 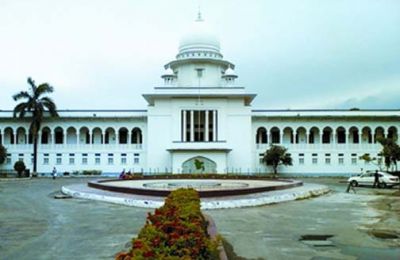 The Supreme Court of Judicature was also a Court of Oyer and Terminer and Gaol Delivery for Calcutta and subordinate factories. As a superior court it had the jurisdiction to superintend the Court of Requests and the Court of Quarter Sessions and the magistrates of the courts. The Supreme Court was also a Court of Admiralty for Bengal, Bihar and Orissa and authorised to punish treason, murders, piracies, etc committed on the high seas within its jurisdiction. The court had jurisdiction over all British subjects resident in Bengal, Bihar and Orissa. But the Regulating Act and Royal Charter defined the jurisdiction of the court in vague terms.

Consequently, from the beginning of its operation, the Supreme Court was subject to criticism on account of its extravagant claims about its jurisdiction. The court was often used by the influential Europeans as an instrument of oppression. Much discussed judicial murder of maharaja nanda kumar is a case in point. Though natives were outside the juridical reach of the court, according to the Regulating Act, many zamindars had been tried by it. Revenue default was interpreted as a debt to the company. As debt dispute between the natives and Europeans was cognizable by the Supreme Court, so the zamindari revenue default was sometimes interpreted as a debt. Natives permanently resident in Calcutta were made subject to the Supreme Court. But instances are not rare about extending the Supreme Court jurisdiction over non-resident Bengalis as well.