Tabla a pair of small drums played on by both hands, usually as an accompaniment to music, songs or dances. The tabla consists of a pair of instruments: the tabla or daina on the right and the banya or dugi on the left. It was once known as talmrdanga. It is widely believed that Amir Khasru cut the mrdabga in two halves to create the tabla in the 13th-14th centuries. 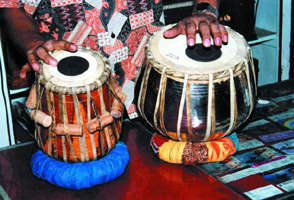 The bowl of the tabla is made of wood and has a height of 9-12 inches. It is narrower at the top than at the bottom, with the circumference at the top being 5-6 inches and that at the bottom 8-10 inches. The top is covered with parchment, with the centre having a thick round layer of black coating called gab, syahi or khiran.

The body of the banya may be made of clay, copper, or brass. The circumference of the banya at the top is about 10-12 inches, slightly more than at the bottom. Like the tabla, the banya top also has parchment stretched tightly across it, with a gab at the centre. Strings are attached to the parchment top of the tabla to allow its notes to be made high or low.

The tabla and banya are placed on a thick ring made of cotton cloth. Traditionally, the tabla is played while seated, but nowadays it is not unusual to see tabla players standing during the performance. Before they are used, both the tabla and banya are fine-tuned. The notes of the tabla are known as rela, kayda, gat, adi, kuadi or gatparan. There are a number of tabla gharanas or schools. Two Bengali table-playing gharanas are the Vishnupur gharana and Dhaka gharana. [Sambaru Chandra Mohanta]