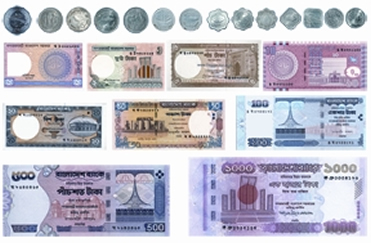 Taka name of the currency of Bangladesh. The word is derived from Sanskrit 'Tanka' which was a denomination of silver coin of four masha weight in ancient, and even in medieval times. The term Taka was widely used in different parts of India but of course, with different meaning. In north India, Taka was a copper coin equal to two paisa and in the south, it was an aggregate of four paisa or one anna. It was only in Bengal where Taka was taken as a sliver rupee. However, in all areas of India, Taka was used laxly for money in general. But Bengal was of course the stronghold of Taka.

Rupee was introduced by the Turko-Afghan rulers and strongly upheld by the Mughals and the British rulers. The Bengal people always described Rupee as Taka, be it of silver or of gold. ibn batuta noticed that in Bengal, people described gold coin (dinar) as gold tanka and silver coin as silver tanka. In other words, whatever might be the metallic content of the coin, the people called it Taka. It is indeed noteworthy that the Bengali nation has borrowed two crucial things from the very heart of its history and heritage - the name of the state, Bangladesh; and the name of its currency, Taka. [Sirajul Islam]