Tribal Dance dance performed by tribal people based on their customs and beliefs. Tribal dance evolved through the experience of the aborigines. They had to fight ferocious beasts of the jungle and hunt animals and birds for their survival and existence. Before going out for a hunt, hunters would draw pictures of their prey and dance in a body, imitating a hunt. 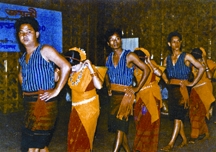 People danced to placate or defeat evil spirits, to prevent decay and diseases, to cause rainfall for production of crops, or to prevent drought or famine. With the evolution of society, human activities have undergone many changes resulting in differences in dance styles. Different tribes like manipuris, santals, oraons, Murongs, chakmas, garos, khasias, Kochas, hajongs etc, live in the plain land and hilly regions of Bangladesh. Although some changes have taken place in the livelihood, religious beliefs and lifestyles of some of these tribes, there has been no radical change in their way of life. Even today collecting fruits and roots from the jungle, hunting and jhum cultivation continue to be the main sources of their livelihood and they still tend to follow their ancestors in their various religious and cultural festivals.

Most tribes perform in dances, songs and music on religious festivals, births, deaths, marriage ceremonies, and other festivities. They perform dances individually or collectively, in traditional dresses, along with their own songs. They make their own musical instruments. Their dances are named after their tribes, eg Santal dance, Garo dance, manipuri dance etc. They perform dances not only on the occasion of construction of houses, cultivation and fishing, but also to celebrate the creation of man. They perform dances desiring rainfall in time of drought, beseeching divine influence then. The Khasias say 'The better the dance, the better the crop. Musical instruments such as the drum, madal (a kind of tom-tom) and flute are generally used as accompaniment.

A ritual, called ganna in the tribal language, is performed by the Garos of Mymensingh with a view to pleasing the leader of the community, known as Nokma, through presenting him a ring. The dance is intended to express joy.

A dance known as jariyali is also quite common in this region. The technique of picking fruits from the trees has been converted into a dance by the Garos. Dances are even based on the daily lives of pigeons. Thus, one dance shows how pigeons collect their food, feed and fondle each other.

Among the Lusais and Kukis of the Chittagong Hill Tracts, no religious ritual is possible without dancing. A dance known as chai is presented by them based on the production of crops. The dance shows the three stages of cultivation: first during jhum cultivation, secondly when the crop is ripe and thirdly during harvesting. This type of dance involves extremely monotonous and slow bodily movements and is presented by the children in front of the house of the leader of the village throughout the whole night. It is customary to sacrifice chickens before the dance starts.

The Mahamuni fair is a unique religious festival of the Chakmas. On the occasion of this fair, held at the beginning of Chaitra, there is a music and dance ceremony. At the beginning of the festival the statue of Mahamuni (the great sage) Buddha is placed at the temple. Then the young men and women perform together in a dance which is inspired by deep devotion.

In addition, dances are performed by Chakmas to have a good harvest and rainfall, and sometimes just for entertainment. The dance arranged for rainfall is participated not only by young people, but also by the older members of the community who come forward with full pitchers to spray water on the young ones.

The bamboo-dance of the Chakmas is very popular. Locally it is known as Cheralam. In this dance two groups of men or women hold two bamboos on each side of the group of dancers. They create a rhythmic sound by striking pairs of bamboos. The dancers hop in the spaces between the two bamboos in rhythmic unison, taking care to jump before the bamboos clash. Unless the dancers are very nimble, they stand to get badly hurt.

Murong or Khusi tribesmen do not mourn when someone dies. Because they believe that mourning will hurt the soul of the deceased, they indulge in dances and songs and make merry. They also exhibit the articles used by the deceased and keep them beside the dead body. They believe that the deceased persons will use these in heaven.

The Huduma dance is popular among the rajbangshi tribe in north Bengal, particularly in Rangpur and Dinajpur. The goddess of rain is called Huduma in the local dialect. If there is a drought in the month of Chaitra, the village women go to the fallow land, undress, and dance all over the field.

They then proceed to the compound of the headman of their village, dancing in a body. The inmates of the house leave their house and go elsewhere, because they believe that if any man looks at the sight he will lose his eyesight and that there might be no rainfall ever. The women dance the whole night, moving from house to house. Then they go back to the field before dawn, dress, and return home.

The karam dance performed on the occasion of harvesting, is very popular among the Oraon in the Rajshahi region. This dance continues for several days and nights and imitates the farmers sowing seeds and harvesting. The jhumur dance, from the name for the string of bells worn round the ankles, is performed sometimes as the worship of gods and the goddesses, sometimes for lovemaking, and sometimes for rainfall. This type of dance is performed with various bodily gestures and postures. 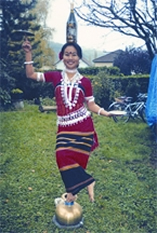 The jatur dance, in which both men and women dance on the occasion of harvesting or the spring festival, is unique and is an integral part of the social life of the Santals. The participants in this dance make two circles, with the girls in the inner circle and the boys in the outer circle. The dance commences with the dancers paying tributes to the god of crops.

The dancers raise their hands and kneel down to express their devotion to the god and goddess. Through this dance they beseech the god to make them happy throughout the whole year, to let them have better crops then, and to exempt them from epidemics such as cholera and pox.

Most tribal dances were traditionally performed without any stage, makeup room, lighting etc. There were no elaborate arrangements for music or singing. The dancers themselves sang. As in the bamboo dance, the musical instruments can merely be a pair of bamboos. Television and tourism have had an impact on tribal dancing, and stage, musical instruments, lighting, makeup, and decoration have all become more elaborate. [Kamal Lohani]