Tungipara Upazila (gopalganj district) area 127.87 sq km, located in between 22°50' and 23°01' north latitudes and in between 89°48' and 89°57' east longitudes. It is bounded by gopalganj sadar and kotalipara upazilas on the north, chitalmari and nazirpur upazilas on the south, Kotalipara' upazila on the east, Gopalganj Sadar and mollahat upazilas on the west. 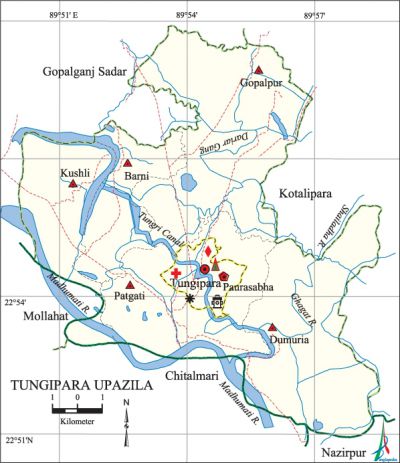 History of the War of Liberation On 19 May 1971, the Pak army raided the residence of Bangabandhu sheikh mujibur rahman at Tungipara. On the same day the Pak army killed Sheikh Mithu, Arshad Ali, Torab Ali, Dhala Miah Sardar and Liku; they also set some houses of Tungipara on fire. During the war of liberation the local razakars established a camp in the residence of Bangabandhu. On 11 July the freedom fighters (Hemayet Bahini) launched an attack on the camp; the razakars were defeated and were driven away.

Natural resources Pit coal has been detected in the Barnir Baor area of the upazila.'