Vikramapura the political and cultural centre of ancient Bengal survives only in the name of an area in the Munshiganj district of Bangladesh. The remains of the city of Vikramapura, the capital of the ancient kingdoms of southeastern Bengal, are lost and its location can only be guessed on the basis of available data.

The name of Vikramapura survived in the name of a pargana in the Mughal period. It appears in Todarmal's settlement in the 16th century yielding revenue of Rs 83,376. By 1728 the revenue had increased to Rs 1,03,001, and to decrease again in 1763 to Rs 24,568, partly due to creation of two new parganas, Rajnagar and Baikunthapur, out of it and partly due to the destructive activity of the Padma. Today the name does not exist even officially; but the inhabitants of a vast tract of land in the Munshiganj district still feel pride in saying that they belong to Vikramapura, which, of course, emanates from the past glory of the area. 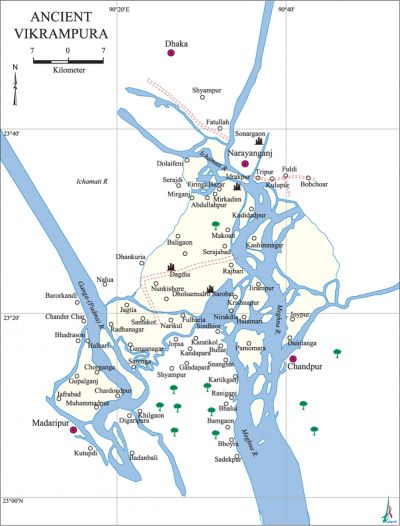 In the ancient period Vikramapura was undoubtedly the most important political centre in the vanga janapada. Indeed, it was the capital city of the Chandra, Varman and Sena rulers, from the beginning of the 10th century AD to the beginning of the 13th century AD. Vikramapura appears for the first time in the copperplates of Srichandra as sa khalu xrivikramapura samavasita xrimajjayaskandhavarat (from the royal camp of victory or capital situated at Vikramapura) and it held that position through the rule of the subsequent Varman and Sena dynasties.

Even during the rule of the Senas, who held sway over practically the whole of Bengal, Vikramapura continued to be their capital, and laksmanasena came to this place after his defeat at Nadia at the hands of the Muslim invader bakhtiyar khalji, where his two sons, Vishvarupasena and Keshavasena ruled for a short period. Though the copperplates of Vishvarupasena and Keshavasena do not mention Vikramapura as the capital, but the land granted by them lay in Vikramapura bhaga, indicating their hold over the area. Vikramapura's eminence continued till the early 1280s, when Danujamadhava Dasharathadeva or danuj rai of Ziauddin Barani transferred his capital to nearby Suvarnagrama (sonargaon). From then onwards, throughout the Sultanate period, Vikramapura remained in oblivion, only to make a comeback as the name of a pargana in the Mughal revenue roll. The heroic resistance to Mughal aggression put up by chand rai and kedar rai, the zamindars of Vikramapur (two of the illustrious bara-bhuiyans of Bengal) added short-lived glory to Vikramapura.

Today Vikramapura is an extensive region of the Munshiganj district, and at some point of time it extended over some parts of Faridpur across the Padma. However, it must be said that it is difficult to ascertain the exact boundary of the territorial unit of that name. On the basis of the geophysical characteristics of the area an attempt can be made without any claim for exactitude. In the thakbast surveys map (1845-1877) there is no mention of the Kirtinasha (the Padma just before meeting the Meghna). Vikramapura comprised the area with the Padma on the west, the Dhaleswari on the north and east, and the confluence of the Arial river and the Meghna on the south. A local poet Lala Ramgati in his Mayatimirachandrika mentions that Brahmin Pundits abound in the beautiful rajya named Vikramapura, which lies between the Brahmaputra mahatirtha on the east and the Padmavati on the west.

The small river Kaliganga (shown in James Rennel's map of 1781) flowed through the middle of the tract, and on its either bank grew the prosperous villages of Idrakpur (Munshiganj), Firingibazar, Abdullapur, Mirganj, Serajdikha, Sekernagar, Hasara, Sholaghar, Baraikhali, Thaodiya, Baligaon, Rajabadi etc on the north and Mulfatganj, Karatikal, Japsa, Kandapada, Shyamsundar, Khilgaon, Sarenga, Chikandi, Ganganagar, Radhanagar, Rajnagar, Ghagariya, Larikul etc on the south. The Padma, however, played havoc in the area in the 17th century and by devouring the glorious deeds of Chand Ray and Kedar Ray earned the epithet of Kirtinasha, the destroyer of relics. The Kaliganga cut through the middle of the tract dividing it into two parts: Uttara Vikramapura and Daksina Vikramapura. About 200 years ago Vikramapura was about 30 to 40 miles from east to west and about 8 to 10 miles from north to south.

The site of the city of Vikramapura has been identified with the Rampal area not far from the modern town of Munshiganj. It has been estimated on the basis of the archaeological exploration of the area that the ancient capital covered about 15 square miles, on which are situated some 17 or 18 villages. To the north is the Ichhamati river, and there still stand the remains of a very high parapet running east to west, parallel with the ancient course of the river. To the east is the ancient stream of the Brahmaputra. There are two wide moats, one on the west and one on the south, which in present times are known respectively as the Mirkadim canal and the Makuhati canal. The royal palace, known as the Vallalbadi, on high ground within the mud-fort citadel, with a 200 feet wide ditch around it, is now in ruins.

A large number of tanks, mostly dating from pre-Muslim period, can be seen around Rampal, but hardly any building of that period except the derelict ruins of temples; NK Bhattashali identified in 1929 the remains of as many as 30. Dhipur and Sonarang are the two important temple sites mentioned by him. RD Banerji also noticed structures in nearby Raghurampur. Vajrayogini, a nearby village, was the birthplace of the famous Buddhist scholar atish dipankar srijnan. The whole area yielded highly valuable antiquities: sculptures of exquisite quality (both Hindu and Buddhist), objects of precious metals. A silver Visnu image from this area (Churain) is now preserved in the Indian Museum. An eleventh century divine nymph (surasundari) hewn out of a long wooden pillar and forming a part of a column (now preserved in the Bangladesh National Museum) is considered to be a unique find in the whole subcontinent. Two other wooden pillars with sculptural decorations were found from the famous Rampal Dighi (2200 ft x 840 ft). Though the present landscape around Rampal would not give any indication of the existence of a metropolis in the distant past, the find of the antiquities and the legends around speak of the past glory of the ancient city. The river system around might have also contributed to the extinction of the once prosperous city. However, the medieval ruins of a mosque and tomb of baba adam shahid at Rampal now stand as the only visible historical monuments in the area.

Whether the name of the village Rampal has any connection with the famous Pala king of that name is difficult to ascertain. It is known from epigraphical records that the Varman king Bhojavarman or Samalavarman propitiated the friendship of the Pala king Ramapala by offering him elephants and chariots. It may be that Ramapala visited Vikramapura and the area near the palace where he was ceremoniously received was developed and named after him. It is unlikely that Ramapala had Vikramapura area under his control. There is a local tradition that the area was named Rampal after a local merchant. Ramananda Pal, popularly called Ramapala, was the grocer to the royal family during Vallalasena's rule, and he amassed wealth, settled down in the neighbourhood of the royal palace and came to be recognised as a respectable person. When Vallalasena dug his dighi, it stretched up to Ramapala's house. A local proverb goes like this: Vallal katay dighi, name Rampal (the tank was excavated by Vallal, but it got the name of Rampal). [AM Chowdhury]