Wader birds belonging to the suborder Charadrii of the order Charadriiformes. In Bangladesh the suborder is comprised of Jacana, Painted Snipe, Oystercatcher, Avocet, Stilt, Ruff, Godwit, Stone Curlew or Thick-knee, Prantincole, Lapwing, Plover, Sandpiper, Snipes, Stints, Dunlins and Woodcock. By and large the shore birds are small to near medium birds, with long legs, long necks and long bills.

Only plovers, thick-knees, and lapwings have comparatively smaller bills. Most of them have distinctive wingbars and species-specific call-notes; sexes more or less similar, however, during breeding season or in summer males of many species wear nuptial colours over the head, neck and face. All are gregarious water loving birds; most of them breed in tundra, taiga, moorland or grassland in the Arctic, northern Europe, and Asia in summer. Almost all such northerly birds migrate to warmer parts of Europe, Asia, and Africa during winter. 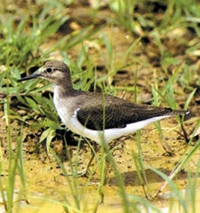 Wading bird Long-legged birds that are capable of wading through knee-deep water; belong to the order Ciconiiformes. These include bitterns, egrets, flamingos, herons, ibises, spoonbills and storks. Since herons and egrets have been considered elsewhere, the remaining species are considered here. Bitterns are the smallest in the group and are colourful; size: usually 25 to 40 cm, however, the Eurasian Bittern is about 60 cm. Bitterns have shorter neck and leg but longer slender toe and stouter body than the herons; inner toe is longer than the outer while the herons have the opposite; bills are comparatively longer and sharp. There are five species of bitterns in Bangladesh. The common and widely distributed one is the Chestnut Bittern (Nolghongha or Lal Bok), Ixobrychus cinnamomeus; Yellow Bittern (Haldey Bok), I. sinensis is common in the north-eastern parts of the country; Little Bittern (Khudey Bok), I. minutus is rare and Black Bittern (Kalo Bok), I. flavicollis is not uncommon. Common names indicate the colour of the species excepting the Little Bittern whose male is strikingly black and pinkish when female is brownish with streaks. Eurasian Bittern (Badami Dora Bok), Botaurus stellaris is a migratory species and is rarely seen in the country. 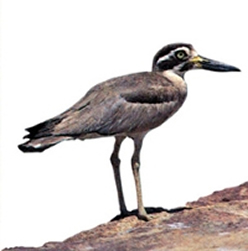 All ibises have long decurved bills, long legs and neck, and their heads are usually naked. In Bangladesh the common species is the White or Black-headed Ibis (Kasteychora), Threskiornis melanocephalus. This is a resident bird, usually building nest along with other colonial nesters in the coastal areas. Other two rare species are: Glossy Ibis (Chakchakey Duchora), Plegadis falcinellus, and Black Ibis (Kalo Duchora), Pseudoibis papillosa. These two are rare and possibly winter migrant. Eurasian Spoonbill (Khuntey Bok), Platalea leucorodia is a snow-white bird with spatulate black bill tipped yellow and black feet. It is migratory and mostly confined to the coastal areas. Greater Flamingo (Kanthuti), Phoenicopterus ruber has long neck, legs and downcurved lamellate bills; body white with rosy legs and black bordered scarlet wings.

There are over half a dozen species of storks in Bangladesh; all are large, heavy-billed and weighty. Open-billed Stork (Shamuk-khol or Shamuk Bhanga), Anastomus oscitans, Lesser Adjutant Stork (Madantak) Leptoptilos javanicus; Greater Adjutant Stork (Hargila), Leptoptilos dubius; Painted Stork (Shonajhongha), Mycteria leucocephala; White- or Woolly-necked Stork (Manikjor), Ciconia episcopus, and Black-necked Stork (Loharjongo), Ephippiorhynchus asiaticus are the resident species. However, only first two species are regularly sighted in small numbers, others are rare. White Stork (Sada Manikjor), Ciconia ciconia used to be an occasional visitor to the Sundarbans but not seen during the past decade. Excepting the Lesser and Greater Adjutant Storks all others are partial or seasonal migrants. They are colourful and have large bills. Openbill Stork's bill has an arching of mandibles at the centre thus creating a large gap. [Ali Reza Khan]