Wari-Bateshwar an archaeological site in Narsinghdi district of Bangladesh. Cultivation of land, digging drains, cutting garbage-pit and red soil for building local traditional mud-house and other household activities of the local people regularly turn the surface upside down which expose the objects of ancient people in Wari-Bateshwar. In addition, after rain fall, wonderful beads of semi-precious stone and glass, silver punch-marked coins etc. are rinsed out which results into clear visibility. In 1930s, local schoolteacher Hanif Pathan and afterward his son Habibulla Pathan started collecting those artifacts and later carried out research with a curious mind. But for a long time, this potentially important archaeological site had failed to attract the attention of professional archaeologists in Bangladesh. After waiting for 60 years, archaeological exploration started in 1989 resulting regular excavation from 2000. 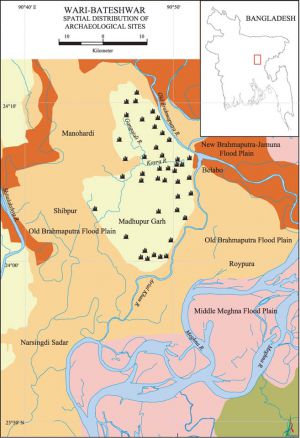 A two thousand five hundred year old fort-city was discovered at Wari-Bateshwar, after extensive exploration and limited excavation. In the 600m x 600m fortified enclosure, there are four mud ramparts. Though most of the parts of the ancient ramparts have been destroyed but evidence of 5-7 feet height walls still exist in some places. The ramparts are surrounded by moat, which, in course of time, silted up and turned into paddy fields. However, the eastern part of the silted moat can easily be visualized.

In the west and south-west side of Wari-Bateshwar citadel, there is a 5.8 km long, 20m wide and 10 m high mud rampart known as Asom Razar Garh. Most probably this was linked to the defensive system of Wari-Bateshwar fort-city which can be considered as the second fortification wall. Nagarjunakonda in India is an example of double fortified ancient city.

So far 50 archaeological sites have been discovered in and around Wair-Bateshwar fort-city located by the bank of the river old Brahmaputra. It is evident from the pattern of the archaeological sites that the ancient people established their settlements in flood-free zone. This is also the evidence of the knowledge of developed town planning and intellectual height of the ancient settlers. Similar settlement patterns are evident at Mahasthangarh (Pundranagar) in Bogra and Allahabad region of Uttar Pradesh, India.

Wari-Bateshwar is called a fort-city, city or urban centre. Forts have been termed as cities in the Arthashastra by Kautilya. Kayata, an eleventh century grammarian, mentions that a city is a living place which is enclosed by high walls and moats. Rules and regulations formulated by the artisans and trader groups were in practice, in ancient city. To Gordon Child, the features of an urbanisation include memorials, vast region with dense population, a variety of classes of people (rulers, traders, artisans) who are not associated with food production. The urbanisation also includes practice of art, literature and science. To Amalandu Ghosh, the prerequisites of the emergence and development of a city are the administrative framework and development of trader groups. 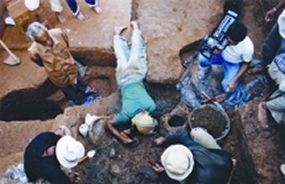 According to RS Sharma, not only the area and population but also materialistic life style and occupational variation are the essential elements of a city. Agricultural surplus is essential for the existence of a city. Any habitation site that is not connected with agriculture is never a city. Centers for technical skill and the system or policy of economic exchange are also important for urban life. According to Dilip Kumar Chakrabarti only trade can be considered as the sole instrument of measuring the urban development. Wari-Bateshwar was the city formed by such urbanisation process. Analyses of discovered artifacts also show Wari-Bateshwar as an affluent trade center. On the basis of sandwich glass bead and Indo-pacific monochrome drawn glass bead, it is assumed that there was trade relation between Wari-Bateshwar and the Mediterranean. Besides, the raw material of the semi-precious stone beads which are made of agate, jasper, chalcedony, quartz, amethyst etc. were being imported from abroad.

In the vicinity of Wari-Bateshwar, nearly 50 archaeological sites have been discovered. It is assumed that they used to live by agriculture and their surplus food productions were used to fulfill the necessity of the businessmen, priest and royal officials - those who lived in the city. 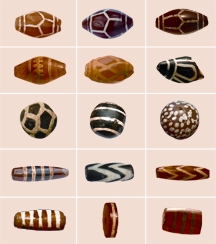 The ancient inhabitants of Wari-Bateshwar were familiar with developed technical knowledge. By cutting the stone, they could manufacture beads. Raw materials, chips and flakes of semi-precious stone bead manufacture have been discovered during excavation. Through using different types of chemicals, they could decorate the beads. They could also coat the northern black polished ware using different chemicals. High technology was used to control the temperature during pottery manufacture. They knew the technique of coin manufacture melting metal. They had the knowledge of iron processing. The location of Wari-Bateshwar fort-city and Asom Rajar Garh prove that, the inhabitants were experts in geometric knowledge. These factors indicate the ancient inhabitants’ close acquaintance with technological and scientific knowledge as well evidently indicate their artistic sense, adoration of beauty and skills in several technological works. Northern Black Polished Ware has a close relationship with urban culture. Generally northern black polished wares are found in the archaeological sites of the second urbanisation of the subcontinent. It is said that to meet the practical needs of the rulers and traders of the second urbanisation, these northern black polished wares were produced. For the presence of Old Brahmaputra river, it is assumed that Wari-Bateshwar was a river port and a trade centre. From the discovery of semi-precious stone beads made of agate, quartz, jasper, carnelian, amethyst, chalcedony etc. Dilip Kumar Chakraborti (professor, South Asian Archaeology, Cambridge University) mentions that Wari-Bateshwar might be the Souanagoura a trading centre which was mentioned by Ptolemy (2nd century geographer). Basing on the artifacts that have been discovered, we also agree that Wari-Bateshwar was that Souanagoura. 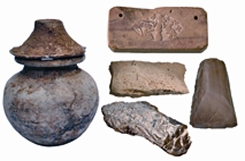 In Wari-Bateshwar, two types of silver punch-marked coins have been discovered. One type is Janapada or pre-Mauryan silver punch-marked coins. In the subcontinent the Janapada coins were circulated from ca. 600 BC to 400 BC. The discovery of Janapada coins places Wari-Bateshwar back to the Sodosha Maha Janapada (ca. 600-400 BC) kingdom of Indian subcontinent. In recent archaeological excavation evidence of human settlement has been discovered which bears the character of Chalcolithic culture. In Wari-Bateshwar the most important discovery of the chalcolithic culture is black and red ware and evidence of pit-dwelling.

Several evidence of pit-dwelling has been discovered at Inamgaon, Maharashtra, India. Ethnoarchaeological research shows that at Inamgaon, pit-dwelling culture still exist there. However, though Pit-dwelling of semi-arid Inamgaon has been discovered, the pit dwelling of Wari-Bateshwar arise a great question. In present context, a question arises that in a rain prone region how a pit-dwelling is feasible? Due to heavy rainfall, the exuded water will fill the pit. It is known from archaeological literature that circa 1500 BC or prior to 1000 BC, the weather of Indian subcontinent was dry.