Water Pollution Water is considered polluted when it is altered from the natural state in its physical condition, and chemical and microbiological composition, so that it becomes unsuitable or less suitable for any safe and beneficial consumption. The term contamination is used synonymously with pollution. The signs of water pollution are obvious: bad taste; offensive odours from lakes, rivers and sea beaches; unchecked growth of aquatic weeds in water bodies; decrease in number of aquatic animals in surface water bodies; oil and grease floating on water surfaces; colouration of water; etc. Besides these obvious signs, there are other kinds of pollution, which are not so visible. 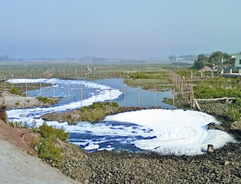 Sources of pollution Factories, power plants and sewage treatment plants are considered point sources of water pollution, because they emit pollutants at discrete locations, usually through a pipe that leads to a lake or stream. Nonpoint sources of water pollution are scattered or diffused. Cropland, forests, urban and suburban lands, roadways, and parking lots are nonpoint sources of a variety of substances including dust, sediment, pesticides, asbestos, fertiliser, heavy metals, salts, oil, grease, litter, and even air pollutants washed down from the cloud by rain.

Pollution takes place in all the three main sources of water, ie rain water, surface water and groundwater. Surface water is more susceptible than groundwater, which is naturally protected from surface activities.

Rainwater pollution Acid rain damages forests and may cause significant decrease in productivity. Numerous authors have also raised concern for crop damage. Acid rain is particularly damaging to buds; therefore, acids falling on plants in springtime may impair growth. Acidification of soil may also impair soil bacteria that play an important role in nutrient cycling and nitrogen fixation. Acid rain is also capable of corroding manmade structures. Examples of such corrosion are: the Statue of Liberty, the Canadian Parliament in Ottawa and Egypt's temple at Karnak. Acid rain may also damage house paint and etch the surfaces of automobiles. There is no record of acid rain in Bangladesh. However, due to extensive air pollution in Dhaka city, it is very likely that rain water in Dhaka would be more acidic than rain water in rural areas.