Wheat cereal plant of the genus Triticum, especially, T. aestivum, of the family Graminae. The grain constitutes a major food item and an important commodity on the world grain market. Wheat is one of the first of the grains domesticated by human. Bread wheat is known to have been grown in the Nile Valley by 5000 BC and it is believed that the Mediterranean region was the centre of domestication. The civilization of West Asia and of the European peoples have been largely based on wheat, while rice has been more important in the East Asia. Since agriculture began, wheat has been the chief source of bread for Europe and the Middle East. It was introduced into Mexico by the Spaniards in the early part of 16th century and into Virginia, USA by English colonists early in the 17th century. Although it is one of the oldest of the cereal crops, it was introduced in Bengal in 1930-31. Its importance as a food crop was recognised around 1942-43. The plants bear this edible grain in dense spikes. The culm of the mature wheat plant is a hollow, jointed cylinder that comprises 3-6 nodes and internodes. 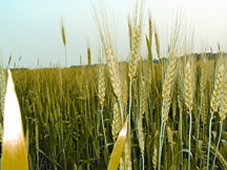 The wheat leaf consists of the sheath, blade, ligules and auricle. The leaf sheaths normally enclose the lower 2/3 of culm. A maximum of 5-7 seminal roots may function throughout the life of the wheat plant. Until now the Bangladesh Agricultural Research Institute has developed 16 varieties of wheat. Sonalika, the variety released in 1973, remained dominant through the 1980s. Kanchan, developed in 1983 and made available to growers in 1987, now covers more than 80 percent of the wheat area.

Cultivation Wheat is grown under a wide range of climatic and soil conditions. It however, grows well in clayey loam soils. In Bangladesh it is a crop of Rabi season, requires dry weather and bright sunlight. Well distributed rainfall between 40 and 110 cm is congenial for its growth. Depending on variety and weather conditions, 100-120 days are required from sowing to harvest.

Farmers in Bangladesh grow wheat fitting the crop in their intensive rice-based cropping systems. About 80 percent of wheat area is planted in a three-crop rotation, 60 percent being aush rice, transplanted aman rice-wheat and 20 percent being jute-transplanted aman rice-wheat. About 2 million farmers have benefited from wheat cultivation; about 600,000 people are employed for a period of 120 man-days during the wheat season, and 20 million m tons of wheat worth US$ 3.4 billion have been produced in a period of 20 years (1975/76-1995/96). In absence of the wheat programme, the country would have had to import on an average about 0.9 million m tons more food grains annually.

Wheat research was initiated as early as 1936 by the first economic botanist to the Government of Bengal, but no emphasis was given to its development as a commercial crop. On account of acute food shortage after the great famine of 1943, a ‘grow-more-food’ campaign was launched which emphasised wheat cultivation. However, no major research programme was undertaken. During the initial years of the Pakistan period, little attention was given to wheat research in East Pakistan (now Bangladesh). Research on modern varieties of wheat was initiated in 1965 when a small quantity of seed of two Mexican wheat varieties, Penjamo 62 and Sonora 64, was received from the Tandojan Agricultural Research Station, West Pakistan (now Pakistan). Dr Norman E Borlaug, then Director, Wheat Programme, International Maize and Wheat Improvement Centre, visited Dhaka in 1965 and in 1968. In his reports, Dr Borlaug mentioned that without disturbing major crops one and a half million hectares were available for wheat cultivation. His visit opened the door for the wheat research programme in Bangladesh.

After independence, in 1971, Bangladesh faced an acute food shortage. Production of rice, the main crop, declined because of the disruption of virtually all agricultural activities during the War of Liberation, and also due to various natural calamities, such as floods, droughts, cyclones, and rapid population growth. It was realized that though about 80 percent of the total cropped area of Bangladesh is devoted to rice cultivation, rice alone could not meet the food requirement of the country. Wheat was therefore chosen as an alternate food crop in the winter season, which remains mostly free from natural calamities. In 1975 the government imported 4000 m tons of seed. Prior to 1975-76, wheat was grown sporadically and was almost an unknown crop in Bangladesh. Today, among the cereal crops, it is next to rice in importance. It occupies about 4 percent of the total cropped area and 11 percent of the area cropped in the Rabi season, and contributes seven percent to the total output of food cereals. The common cultivated varieties are locally known as Sonalika, Kanchan, Balaka, Ananda, Akbar, Barkat, and Aghrani.

Uses Almost 50% of the total world production of grain crop is occupied by wheat. In Bangladesh although it is less important than rice, it is now recognized as the second alternative cereal crop in this country. It is highly nutritious and high energy food source. It is mostly used as ata or maida (wheat flour) for preparation of bread and cakes. Flour from hard-kerneled wheat varieties are used in the manufacture of macaroni, spaghetti, noodles, and other paste products. White and soft wheat varieties have starchy kernels; their flour is preferred for biscuits, piecrust, and a wide range of breakfast foods. Wheat is also used in the manufacture of whiskey and beer, and the grain, the bran, and the vegetative plant parts make valuable livestock and poultry feed. The straw is used as fuel in the rural areas. [Golam Kabir]

Diseases wheat is susceptible to several diseases, the most important being the rusts and smuts. There are also some bacterial, viral and nematode diseases of the crop.

Rusts of wheat caused by Puccinia species were among the earliest fungal diseases known to mankind and have inflected wheat ever since it was being cultivated as a crop. Mention about the disease is to be found in the old testament. Early Romans and Greeks knew about the rust diseases of wheat. Stem rust or black rust of wheat is caused by Puccinia graminis. The obligate pathogen produces the disease at later stages of plant growth. Initial symptoms of rust infection appear as speckles on leaves, leaf sheath, and culms and floral structures. From the infection courts develop oblong, reddish-brown pustules, which may coalesce with one another. Soon these pustules burst and expose masses of brown uredospores. The binucleate uredospores reinfect the host and repeat the cycle several times during a crop cycle. Reports indicate that spraying of lime-sulphur, hydrophobic colloidal sulphur, nickle sulphate and dithiocarbamates control wheat rust. The fungicide Zineb in combinaton with zinc sulphate gives effective control of black and brown rusts.

Leaf rust/brown or orange rust of wheat caused by Puccinia recondite is worldwide in distribution. It is a major wheat disease in Bangladesh and West Bengal. The initial symptom of the disease is the appearance of minute, round sori characteristically orange in colour. Usually the pastules of uredosori are distributed scatteredly on the leaves and rarely on leaf sheaths or stems. Soon these uredosori mature, burst out, and release spores to initiate the next cycle of infection in the plants. Under favourable environmental conditions the uredospores can go for several ‘repeating cycle’ to spread the disease very fast.

Over 100 physiologic races of the pathogen have been recorded. Eradication of crop residues and self-sown wheat plants help to reduce primary source of inoculums. Early maturing varieties are likely to escape the disease. Cultivation of the resistant varieties has been recommended. Some varieties like Akbar, Barkat, Balaka, Kanchan, HD 2278, HD 2281, BAW-42, 46, and WAW-47 are known to be moderately resistant to leaf rust.

Yellow or Stripe rust caused by the fungus Puccinia striiformis occurs occasionally in most of the wheat and barley growing areas, including the hilly eastern part, but is not a countable disease in the plains.

Loose smut caused by the fungus Ustilago tritici is a common disease in the wheat growing areas of Bangladesh. The disease is primarily seed borne in nature and the infection is systemic. The symptoms become apparent only at or immediately after the heading stage. Usually, infected ears emerge from the boot leaf a few days earlier than the healthy ones. Generally, all the spikelets of the panicle are affected and are transformed into mass of black, powdery spores. Before emergence, the smutted spikelets remain covered with a silvery sheet of membranes, which ruptures while the ear emerges from the boot leaf. The spores thus released from infected plants can immediately lodge on the styles of the healthy wheat flowers, germinate, infect the growing grain, and may repeat the disease cycle.

Seed dressing with systemic fungicides like Vitavax and Benomyl has been found to be effective. Resistant varieties of the crop developed in Mexico and tested in Bangladesh have been recommended for farmers.

Alternaria blight of wheat caused by Alternaria triticina was first reported in India in 1962. It is also prevalent in Bangladesh. The disease is noticeable after 7-8 weeks of sowing. Leaves show reddish-brown oval spots, enlarge and become irregular in shape with distinct yellow margins. Such spotted areas may coalesce and give a blighted appearance. The pathogen is both seed borne and soil borne. Seed treatment, and seed certification, need-based foliar spray with maneb or zineb and good agronomic practices are recommended.

Helminthosporium leaf spot (Black point) is caused by Helminthosporium sativum. The disease is world wide in distribution and to be found in Bangladesh. Infection may occur at all stages of growth of wheat. Failure of seed germination, seedling blight, and brown small leaf spots are the usual symptoms. The central portions of the spots are irregular, bordered by brown lining, and encircled by yellowish halo. The fungus is known to be seed borne. Need-based sprays with fungicides at the seedling or later stages of growth may help to control the disease.

Seedling blight is caused by Sclerotium rolfsii. The diseased seedlings become yellowish at the beginning and then become blighted. Seedling blight caused by Rhizoctonia solani or Fusarium sp. has also been reported from different parts of India. Soil drenching with PCNB can be used to control the disease.

Powdery mildew caused by Erysiphe graminis and ‘Take-all’ disease caused by Ophiobolus graminis are minor diseases of wheat in the subcontinent. Tundu or Yellow ear rot is caused by the conjugate action of Anguina tritici, a nematode, and the bacterium Corynibacterium tritici. A characteristic symptom is yellow slime on the stem and inflorescence. Drying of the slime results in sticky yellow layers, causing curly twisting of the spikes. Grains in the ear head form galls caused by the nematode. The incidence of the disease can be minimized by soaking the seed lot in salt brine for the separation of lightweight seed-galls by floatation. [Abul Khair]

Pests The wheat plant is attacked by a number of insect pests including several species of leafhoppers, a termite, Microtermes anandi, and the wheat aphid, Rhopalosiphum rufiabdominalis. Both the leafhopper and aphid pests suck plant juices from the leaves of the young plants and may cause considerable damage if left unprotected. In storage, over one dozen of pests are known to infest wheat and wheat products of which Sitophilus oryzae, S. zeamais, and Rhizopertha dominica are the primary pests. These pests may even damage 80% of the wheat grain if not properly stored. Both the adults and larvae feed on the kernels leaving only the outer covering. The entire developmental stages of these pests are passed within the grain. Among the other notable pests of wheat, flour and flour-based products are the red flour beetle, Tribolium castaneum; confused flour beetle, T. confusum; long-headed flour beetle, Latheticus oryzae; mealworm, Alphitobius diaperinum; Angoumois grain moth, Sitotroga cerealella; and Indian meal moth, Plodia interpunctella. The flour mite, Acarus siro is a nuisance to the storage and impart objectionable odour to flour. [SM Humayum Kabir]