White Clay high quality clay composed of kaolin clay mineral and used mainly in the ceramic industry. In Bangladesh it is used widely as household wares.

There are surface to near surface deposits of white clay in Bijoypur and Gopalpur area of Netrokona district, Nalitabari of Sherpur district, Haidgaon of Chittagong district and Baitul Izzat of Satkania thana, Chittagong district. Besides there are subsurface deposits of white clay in Maddhyapara, Barapukuria, Dighipara of Dinajpur district and Patnitala of Naogaon district. The exposed white clay is not good in quality. It is used in the ceramic factories of Bangladesh after mixing with high quality imported clay. 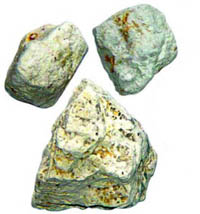 The Geological Survey of Pakistan (GSP) first discovered white clay at Bhedikura of Durgapur Thana in the Mymensingh district in 1957. Later on in 1957-58, geological mapping in that area was furnished. In 1964-65 GSP drilled 13 holes in the area to determine the thickness and reserves. In 1978, 1980 and 1983 the geological survey of bangladesh (GSB) conducted detail investigation in the area. The extent of white clay in layers and lenses was found at Bhedikura to Maizpara in the west and Fundakura to Gopalpur in the east. The reserves is 2.47 million ton in an area of 3.84 sq km up to the down dip of 60m. This is known as Bijoypur white clay. The white clay at Bhuranga area of Nalitabari upazila in Sherpur district was discovered in 1990 by the GSB.