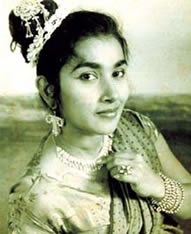 Zaman, Sultana (1935-2012) actress, film producer, was born on 2 September, 1935 in natore district. Her father, Syed Abdur Razzaq was an officer of the zamindar of Natore and Mother was Rahima Khatun. Her family name was Musammat Hosne Ara Sharifa Begum but she is popularly known as Sultana Zaman. She passed her childhood and adolescence in Natore town. Sultana Zaman passed SSC examination from Natore Girl's School, HSC examination' from Rajshahi College and then admitted in BA class. In 1956 she got married to Q M Zaman, the first chief cameraman of Film Development Corporation (FDC) of the then East Pakistan and the cameramen of numerous movie include the first Bangla full-length commercial film Mukh O Mukhosh (Face and Mask, 1956).