Ahmad, Tajuddin (1925-1975) lawyer, politician, and the first Prime Minister of Bangladesh. Tajuddin Ahmad was born on 23 July 1925 at village Dardaria in Kapasia thana of Gazipur District. His father was Moulavi Muhammad Yasin Khan and mother Meherunnesa Khanam. Tajuddin Ahmad passed matriculation in 1944 from St. Gregary's High School in Dhaka, IA in 1948, and BA (Hons) in Economics from Dhaka University in 1953. He obtained Law degree in 1964 and joined the Dhaka bar. 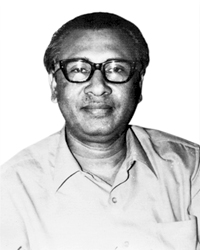 Tajuddin Ahmad joined politics very early in his life. He represented the liberal section of the muslim league since 1943 and took active part in the Pakistan Movement. Tajuddin Ahmad was involved in all progressive movements of the country, including the language movement, the movement for economic emancipation of the people, and anti-communal movement. He resigned from the Muslim League in protest against its anti-people politics. He was one of the founders of the East Bengal Chhatra League founded in 1948, and was amongst those who floated the Awami Muslim League in 1949. He was a member of the All Party Language Movement Committee, and was arrested and detained during the movement.

Tajuddin Ahmad was a founder-member of the East Pakistan Juba League, and was a member of its executive committee from 1951 to 1953. He was the general secretary of Dhaka district unit of Awami Muslim League from 1953 to 1957. Tajuddin Ahmad was elected a member of East Pakistan Provincial Assembly in 1954 as a nominee of the united front, but was arrested under section 92A in the same year. In 1955, he was elected secretary for cultural affairs and social welfare of the awami league.

After the promulgation of martial law in the county in 1958, the Awami League was banned and Tajuddin Ahmad was detained for about a year. He participated in the democracy restoration movement organised by the National Democratic Front headed by huseyn shaheed suhrawardy against military rule of Ayub Khan, and was imprisoned once again. He played a vital role in reviving the Awami League in 1964, and was elected organising secretary of the party. He was arrested again in April 1964, and was released the following year. He actively participated in the election campaign of 1965 in favour of Fatema Jinnah, the presidential candidate of the combined opposition party. Tajuddin Ahmad was elected general secretary of the Awami League in 1966. He joined the convention of the opposition parties held in Lahore as a member of the Awami League delegation (1966). During the Six-point Movement he was arrested under the Safety Act and was kept confined. The mass upsurge of 1969 compelled the government to release him. He participated in the Round Table Conference at Rawalpindi convened by Ayub Khan to resolve the crisis between the government and the opposition parties, as a member of the Awami League delegation. He was elected member of the National Assembly in 1970.

The Awami League got overwhelming majority in the general election in 1970. But the rulers of Pakistan denied the verdict of the people. Consequently, an unprecedented non-cooperation began in East Pakistan under the leadership of Bangabandhu sheikh mujibur rahman. Tajuddin Ahmad was one of the organisers of the movement. Following the army crackdown and arrest of Bangabandhu on 25 March 1971 Tajuddin Ahmad left Dhaka for India with some of his colleagues. He became the Prime Minister of the Bangladesh government in exile at Mujibnagar and organised the war of liberation. After the liberation of Bangladesh Tajuddin Ahmad returned on 22 December 1971 and became Prime Minister of the newly independent state. In the subsequent cabinet formed under Sheikh Mujibur Rahman, Tajuddin Ahmad was in charge of the Ministry of Finance, and then of Finance and Planning. As a member of the constitution framing committee he played a vital role in framing the constitution of Bangladesh. He was elected member of the Jatiya Sangsad in 1973 and was included in the cabinet. However, he resigned from the cabinet in 1974 as per direction of Bangabandhu Sheikh Mujibur Rahman. With the assassination of Bangabandhu Sheikh Mujibur Rahman on 15 August 1975, Tajuddin Ahmad was house arrested on the morning of that day. He was taken to the Central Jail on 22 August 1975. He was brutally killed inside the Dhaka Central Jail on 3 November along with three other national leaders namely syed nazrul islam, ahm qamaruzzaman, and m mansur ali.

Tajuddin Ahmad was a close associate of Bangabandhu Sheikh Mujibur Rahman, the architect of Bangladesh, and played a significant role in the establishment of independent and sovereign Bangladesh. Himself an ardent follower of non-sectarian progressive politics, Tajuddin Ahmad played a significant role in the Bangali nationalist movement. He devoted himself to the service of distressed humanity throughout his life having been connected with the Boy Scout Movement. [Sajahan Miah]