Water bodies madhumati and Babashia are the main rivers and Naidear Chand beel is notable.

Administration Alfadanga Thana was formed in 1960 and it was turned into an upazila in 1984. 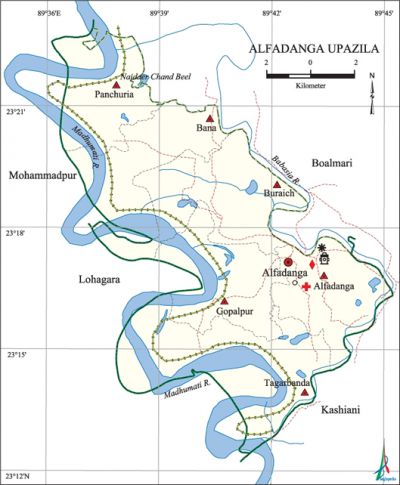 History of the War of Liberation During the War of Liberation in 1971 the Pak soldiers in collaboration with the rajakars tortured and killed a number of people in this upazila; they also plundered and set on fire many houses. On 6 September the freedom fighters attacked the Lahutia Nakshal Camp held by the Pak army and killed Nakshal leader Badsha Jamadar. On 5 November the freedom fighters attacked Pak army camp at Bhatiapara Wireless Office; this time 13 freedom fighters were killed and 10 were wounded by the firing of the 'Pak army from the plane. On 11 November the freedom fighters with the help of the allied forces, tried to capture the Bhatiapara camp. On the night of 18 December Lt. Col Kakol was seriously wounded in a frontal encounter between the allied forces and the Pak army. Alfadanga was liberated on 18 December 1971.

Hats, bazars and fairs Total hats and bazars are 13, most noted hats are Gopalpur, Alfadanga and Shirgram hats.