Alikadam Upazila (bandarban district) area 885.78 sq km, located in between 21°21' and 21°50' north latitudes and in between 92°15' and 93°34' east longitudes. It is bounded by lama upazila on the north, arakan (Myanmar) on the south, thanchi upazila on the east, Lama and naikhongchhari upazilas on the west. The upazila area is located in the relatively plain land of the Bandarban hilly region. Thaikyang Tang, Rurang Tang and Sara Tang are the notable hills of this upazila.

Administration Alikadam Thana was formed in 1976 comprising parts of Lama and Naikhongchhari upazilas and it was turned into an upazila in 1983.

Historical events Since 9th century a major portion of Chittagong Hill Tracts including Alikadam were under the Arakani rule. Arakani rule in Alikadam was disrupted' in the 15th and 16th centuries when Sultan Jalaluddin of Bengal and Khoda Baksh dynasty established temporary control over the region. With the conquest of the region by the Mughals in 1756 the Arakanese rule completely came to an end. The last Arakanese ruler Kong Hla Pru was forced to surrender and was compelled to quit the hilly region along with his family members. 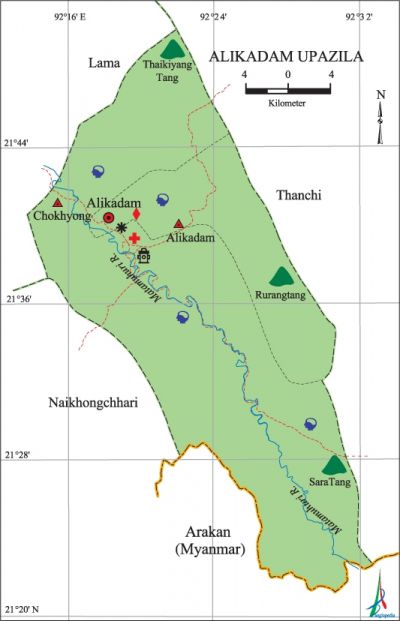