Alivardi Khan(1676-1756) nawab of Bengal, Bihar and Orissa (1740-1756). Originally known as Mirza Muhammad Ali, he was the son of Mirza Muhammad, an Arab by descent and an employee at the court of Azam Shah, second son of aurangzeb. His mother belonged to the Turki tribe of Afshar settled in Khurasan. His grandfather was a foster brother of Aurangzeb. On his attaining adulthood, Azam Shah appointed him as the superintendent of the filkhana (elephant stables); he was also given charge of the zardozkhana (department of embroidered clothes). The death of Azam Shah in a battle in 1707 and the consequent loss of employment put Mirza Muhammad Ali's family in great trouble. For his livelihood he came to Bengal in 1720 with his wife and daughters in a state of penury. But murshid quli khan, the nawab of Bengal, did not receive him kindly. He proceeded to Cuttack, where he was received by shujauddin muhammad khan with due honour. 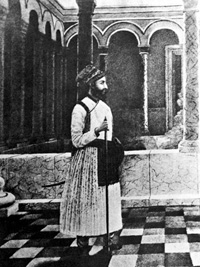 He was initially appointed to a post carrying a monthly salary of Rs one hundred and subsequently elevated to a higher rank as a reward for his satisfactory and faithful services, notably, in reducing to submission some refractory zamindars of Orissa, effecting satisfactory arrangements for the administration of the villages belonging to those zamindars, and effectively reforming the department of finance. Orissa, thus, served as the practising ground in administrative affairs for Mirza Muhammad Ali, who was destined to be the future subahdar of Bengal.

Besides his satisfactory work in Orissa, Mirza Muhammad Ali helped Shujauddin considerably in securing the masnadof Bengal after the death of the latter';s father-in-law Murshid Quli Khan. Shujauddin bestowed rewards and favours on members of Mirza Muhammad Ali';s family in recognition of his sound advice and meritorious services.

Mirza Muhammad Ali was appointed faujdar of the chakla Akbarnagar (rajmahal) in 1728 and was invested with the title of 'Alivardi'. The people of Rajmahal enjoyed peace and prosperity under the efficient administration of their new faujdar.

Alivardi became the principal adviser of Shujauddin in all affairs of state. The nawab placed so much reliance on Alivardi';s advice that he used to summon him once a year from Rajmahal to murshidabad to help him in the transaction of the political and fiscal affairs of the subah. When, in 1732, Emperor Muhammad Shah added Bihar to the Bengal subah (Bihar remained an appendage of the Bengal government from then till 1912) and automatically placed it under Nawab Shujauddin, the nawab did not think it advisable to keep the entire charge of Bihar and Bengal under himself and appointed Alivardi naib nazim of Bihar in 1733. A few days before Alivardi received this new appointment, his youngest daughter amina begum, married to his youngest nephew zainuddin ahmad khan, had given birth to a son, sirajuddaula. Alivardi had no son of his own; he adopted the child as his successor, and made him an object of special favour and affection, as his birth was synchronous with his elevation to that high post. After his stay at Azimabad (Patna) for one full year he was summoned to Murshidabad by Shujauddin, who bestowed him with the title of Mahabat Jang and the rank of panch hazari mansabdar, after which he returned to Azimabad.

Alivardi succeeded in restoring administrative order in Bihar by following a strict policy of repression, sometimes coupled with conciliation. He brought about considerable improvement in the finances of his government, not by imposing additional taxes, but by properly collecting the old ones and by recovering arrears from zamindars. This enabled him to conserve Shujauddin';s goodwill and esteem and to strengthen his own position.

After the death of Shujauddin on 13 March 1739, his son sarfaraz khan ascended the masnad of Bengal. But his government fell victim to the disintegrating forces of ambition and treachery in course of a year and a month. The officers who were faithful during his father's administration grew ambitious to usurp power at his cost. The vicissitudes of fortune suffered by the Delhi empire, resulting mainly from Nadir Shah's invasion, afforded a fair opportunity to the ambitious officers of the Bengal government. Both Alivardi and his brother Haji Ahmad realised that the time was ripe for self-aggrandisement, and the sluggish Delhi emperor, Muhammad Shah, who had been rendered almost helpless, could not check their pretensions.

Alivardi aspired after the subahdarship of Bengal, to secure which he devised various plans with considerable skill and caution. With the help of his friend Mutamanuddaula at the Delhi court and by pledging to pay more than one crore taka to the imperial coffers, he obtained a sanad granting him the government of Bengal, Bihar and Orissa in 1740, which permitted him to wrest authority from Sarfaraz. This he successfully accomplished by killing Sarafarz Khan in a battle at Giria (10 April 1740). Towards the end of April that year, Alivardi received from Emperor Muhammad Shah the recognition of his authority as the subahdar of Bengal along with the titles of Shuja-ul-mulk and Husamuddaula(the valorous of the state and the sword of the empire).

The battle of Giria made Alivardi the undisputed leader of Bengal and Bihar, but Orissa still remained beyond his control. Its deputy governor Rustam Jang, a relative of the deceased Nawab Sarafarz Khan, refused to recognise Alivardi's authority. Alivardi defeated Rustam Jang in the battle of Phulwarion (3 March 1741). Subsequently, Mirza Baqar, who had challenged Alivardi';s authority after the defeat of Rustam Jang, was also defeated by the nawab.

By the end of 1741, Alivardi subdued all his enemies and established his absolute authority throughout the length and breadth of Bengal, Bihar and Orissa. But soon he faced a dreadful new situation in the shape of the Maratha invasions, which kept him restless for the greater part of his life. The Marathas, who became an important politico-military force in eighteenth century India, raided Bengal almost every year between 1742 and 1751 and the repeated invasions exercised a highly pernicious influence on trade, industries, currency, and agriculture in Bengal causing economic distress in the province.

The repeated raids did not bring any substantial gain for the Marathas. They were wearied of their military adventures and longed for a settlement. Because of his old age Alivardi, who withstood the Maratha menace valiantly, was also obliged to look for a settlement. In 1751 a peace treaty was signed between the two sides. It cannot be said that the terms of the treaty were favourable to Alivardi. Under the terms of the treaty the nawab would be required to pay to Raghuji Bhonsle twelve lac taka every year as chouth (one fourth of the revenue). However, a cessation of the hostilities was achieved.

The Maratha invasions encouraged the Afghans to rebel in Bihar. Mustafa Khan, the leader of the Afghans in Bihar was defeated by Zainuddin Ahmad Khan, naib-nazim of Patna. Two other Afghan officers, Shamser Khan and Sardar Khan, concocted a plot with Raghuji for overthrowing the nawab. Alivardi promptly dismissed them from service. But these two Afghans treacherously killed Zainuddin and started a reign of terror in Bihar. Alivardi had to march against them and reoccupy Bihar. He appointed his grandson Sirajuddaula as deputy subahdar with Janaki Ram to assist him. However, the tide of general disorder could by no means be stemmed; and the European traders were consequently emboldened to interfere in the politics of Bengal, just as they had been doing for some years past in southern India.

The calamities produced a terrible depression in the mind of the old nawab, which took a heavy toll upon his health. He fell seriously ill, and feeling that his days were numbered, he summoned his grandson Sirajuddaula before him, gave him counsel regarding the craft of administration and nominated him his successor. The nawab';s disease proved fatal and he passed away on 9 April 1756 at the age of about 80.

Alivardi's regime lasted sixteen years. The first eleven years of his administration formed a period of storm and stress, during which he remained occupied with his enemies and could do nothing substantial to serve the material interests of Bengal. But after his treaty with the Marathas in May or June 1751, he did not fail to realise that measures of reconstruction were needed to heal the wounds inflicted by the ravages of the long continued warfare. He turned his attention towards rebuilding and restoring many towns and villages, which had been desolated by the Marathas, and encouraged agriculture. But the nawab died before he could effect a complete recovery. [Mohammad Shah]