Amtali Upazila (barguna district) area 720.76 sq km, located in between 21°51' and 22°18' north latitudes and in between 90°00' and 90°23' east longitudes. It is bounded by patuakhali sadar upazila on the north, bay of bengal on the south, galachipa and kalapara upazilas on the east, barguna sadar and mirzaganj upazilas (patuakhali) on the west.

Administration Gulisakhali thana, formed in 1859, was shifted to Amtali in 1904 and it was turned into an upazila in 1982. 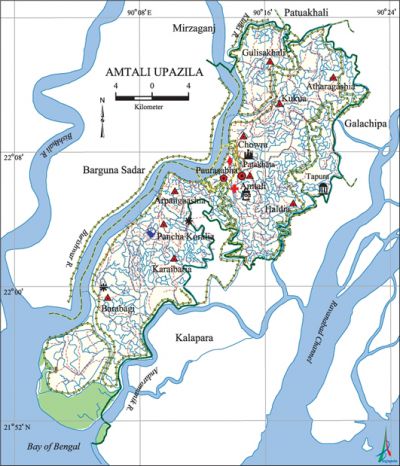 Natural disasters A devastating tidal bore and cyclone of 12 November 1970 in the region causing loss of the people and of livestock; it also damaged serious damage to crops.