Anowara Upazila (chittagong district) area 164.13 sq km, located in between 22°07' and 22°16' north latitudes and in between 91°49' and 91°58' east longitudes. It is bounded by patiya upazila on the north, banshkhali upazila on the south, chandanaish upazila on the east and Chittagong bandar thana and bay of bengal on the west.

Administration Anowara Thana was formed in 1876 and it was turned into an upazila in 1982.

History of the War of Liberation In 1971 Anwara upazila was under sector 1. During the War of Liberation 56 freedom fighters and many a number of Pak army were killed or wounded in encounters at different places like KAFCO, Kaliganj, Paraikora, etc. The Pak army brutally killed 9 innocent persons at village Khilpara and they also set on fire many houses of the Upazila. 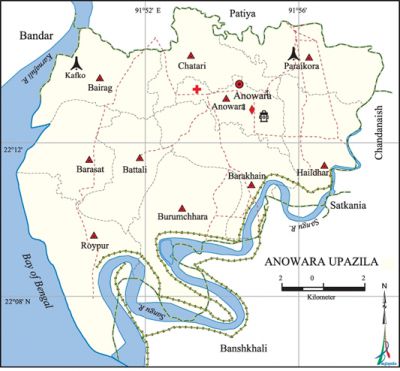 Hats, bazars and fairs Hats and bazars are 5; most noted of which are Minnat Ali Duvashi Hat, Kalu Majhi Hat.