Banshkhali Upazila (chittagong district) area 376.90 sq km, located in between 21°53' and 22°11' north latitudes and in between 91°51' and 92°03' east longitudes. It is bounded by anowara upazila and Sanguriver on the north, chakaria upazila on the south, lohagara and satkania upazilas and wide hilly regions on the east, bay of bengal, Kutubdia channel and kutubdia upazila on the west.

Administration Banshkhali Thana was formed in 1958 and it was turned into an upazila in 1983. 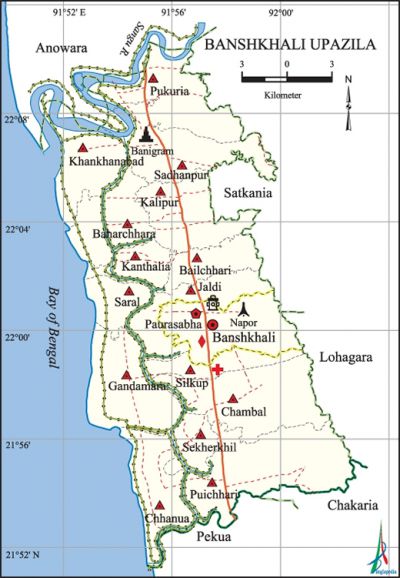 History of the War of Liberation During the war of liberation the Pak army brutally killed 75 persons on 19 May 1971. Besides, they set many houses on fire at villages Jaldi, Banigram and Kalipur. The Pak army also killed 89 freedom fighters at village Naporaon on the southern extremity of Banshkhali. They also caused heavy destruction on the eastern extremity of Banshkhali. They killed freedom fighters Md. Forhad Chowdhury, Sujankanti Das, Flight Sergent Mahiul Alam, Abu Saiyed and Mohammad Elias Chowdhury at village Boilchhari.