Atiqullah, Khwaja (1876-1945) philanthropist and a man of liberal, progressive and secular ideas. The third son of Nawab ahsanullah (1846-1901), Atiqullah was born on 26 July 1876 and received liberal education under the care of British teachers. Besides English he acquired proficiency in Persian and Urdu. Khwaja Atiqullah was well known for his philanthropic activities. He contributed generously for the advancement of education in the country. In 1911 he donated one thousand rupees to the Aligarh University Fund. He was often in debt for his charitable acts. His name is associated with one of the benevolent works performed by his father. The nawab commemorated the marriage ceremony of Atiqullah (7 December 1901) by donating four lakhs rupees for the electrification of the city of Dhaka. 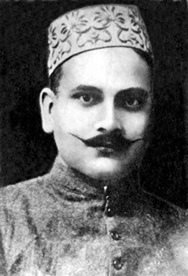 Fond of sports, hunting, poetry and music Atiqullah provided financial support for organising the Hockey Tournament named after him, which was regularly held during his lifetime and remained so for a considerable period even after his death. He could play the violin with great perfection. Sociable and affable by nature he frequently held musical soirees at his residence in dilkusha gardens and invited Qawals and singers from Lucknow and other places. Eminent citizens of Dhaka attended these socio-cultural events, which provided a grand opportunity to the elite of the city to meet, interact and exchange ideas on different relevant issues concerning the society.

The most striking feature of his character was that he nurtured liberal and progressive ideas. He was completely secular in outlook. He was one of the very few members of the NAWAB FAMILY OF DHAKA who supported the secular policies of the indian national congress and remained a member of this organisation till his death. He opposed the 1905 Partition of Bengal, which was supported with great passion and intensity by his brother Nawab Khwaja salimullah. Atiqullah presided over several anti-Partition meetings held in Dhaka and other places. He also sent a memorandum to the Government of India on 31 December 1906, demanding for a 'reconsideration of the Partition of Bengal'.

At the Calcutta Session of the Indian National Congress (1906) Atiqullah moved a resolution denouncing the Partition and held that the Mussalmans of Eastern Bengal, as a body, were not in favour of the Partition. Regarding the Hindu-Muslim relations he shared the view of Syed Ahmed Khan to the effect that the 'Mahomedans' and the Hindus were two brothers of the same father.

The annulment of the Partition (12 December 1911) made the Muslims of Bengal sorely disappointed and Salimullah convened a meeting of the leading Muslims of Bengal on 30 December 1911 to consider the situation and ventilate their feelings. Barrister Abdur rasul, and Khwaja Atiqullah, among others, attended the meeting. Though the two had initially opposed the Partition they now came to realise that the Partition had given the Muslims of eastern bengal and assam some rare advantages that were previously denied to them, particularly in the field of education. At this meeting Khwaja Atiqullah proposed the inclusion of Sylhet in the Presidency of Bengal.

Atiqullah had a continuous under-current of discord with his brothers over property. It surfaced prominently after Salimullah's death on 16 January 1915, because only a week before his death Salimullah appointed his eldest son (Khwaja habibullah) the Mutawalli of their ancestral property. Atiqullah did not accept the decision, filed a suit with the court claiming that he was the actual designated Mutawalli, but he lost the suit.

It was not, however, the family dispute but his strong political belief that had led Atiqullah to support the ideology of the Indian National Congress. He remained a staunch follower of the Congress till the last day of his life.

The eventful life of Khwaja Atiqullah came to an end in January 1945. Several sons and two daughters survived him. His eldest daughter Farhat Banu was married to his nephew Khwaja shahabuddin (1898-1977), who was closely associated with the University of Dhaka and politics of the country. [Sufia Ahmed]