Administration Bandar Thana was formed in 1964 and it was turned into an upazila in 1993. 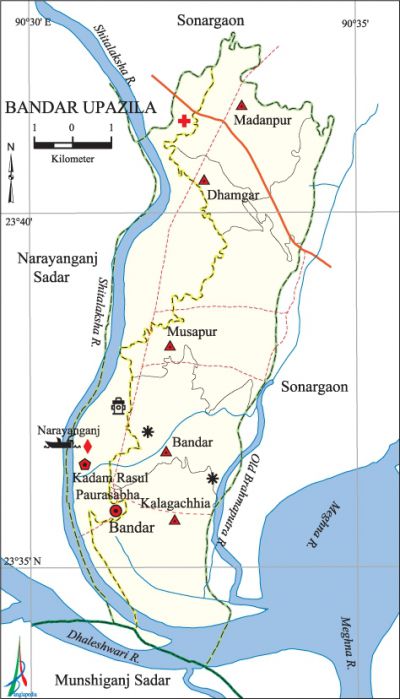 Historical events A number of battles were fought between the Mughal invaders and the defending Afghan rulers musa khan, Abdullah Khan, Daud Khan and the other bhuiyans of Bengal in the early seventeenth century.. On 3 April 1971 the Pak army brutally killed 54 innocent persons in the playground of Sirajdoullah Club. A direct encounter between the freedom fighters and the Pak army was held at Dhamgar area of the upazila on the bank of the river Shitalakshya on 22 November. In another encounter on 27 November the freedom fighters killed a number of Pak soldiers and destroyed a Pak Gunboat. On 12 December the Pak army was defeated and fled to the west side of the river Shitalakshya. Besides, many Pak soldiers were killed or wounded in a direct encounter with the freedom fighters at a place near the Railway Station of the Bandar upazila; this time the Pak army surrendered to the freedom fighters. Bandar upazila was liberated on 15 December.

Natural disasters The cyclone of 1969 and the flood of 1988 caused a huge damage to settlements, livestock and crops of the upazila.